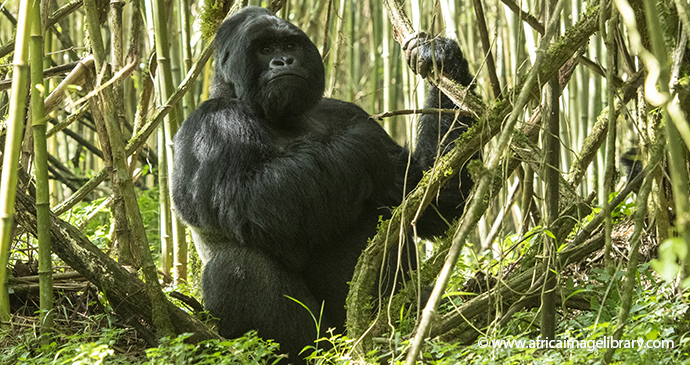 An adult male mountain gorilla, known as a silverback, can be up to three times as bulky as its average human counterpart © Ariadne Van Zandbergen, Africa Image Library

Experience an unfathomable connection during a magical hour in the company of mountain gorillas.

Uganda’s single most important tourist hotspot is the 331km² Bwindi Impenetrable National Park (BINP), which protects a rugged landscape of steep hills and valleys abutting the Congolese border south of Ishasha and north of Kisoro. Rolling eastward from the Albertine Rift Escarpment, the tangled forested slopes of Bwindi provide shelter to one of Africa’s most diverse mammalian faunas, including 45% of the global mountain gorilla population. Unsurprisingly, the main tourist activity in BINP is gorilla tracking, which was first established at the Buhoma park headquarters in 1993, but now operates out of four trailheads – the others being Ruhija, Nkuringo and Rushaga – all of which are serviced by a selection of tourist lodges. Today, 18 habituated gorilla groups can be tracked in Bwindi, a thrilling venture regarded by most who have undertaken it to be a true once-in-a-lifetime experience.

Tracking mountain gorillas in the Virungas or Bwindi ranks among the absolute highlights of African travel. The exhilaration attached to first setting eyes on a wild mountain gorilla is difficult to describe. These are enormous animals: up to three times as bulky as the average man, their size exaggerated by a shaggily luxuriant coat. Yet despite their fearsome appearance, gorillas are remarkably peaceable creatures – tracking them would be a considerably more dangerous pursuit were they possessed of the aggressive temperament of, say, vervet monkeys or baboons, or for that matter human beings. More impressive even than the gorillas’ size and bearing is their unfathomable attitude to people, which differs greatly from that of any other wild animal I’ve encountered. Anthropomorphic as it might sound, almost everybody who visits the gorillas experiences an almost mystical sense of recognition. Often, one of the gentle giants will break off from the business of chomping on bamboo to study a human visitor, soft brown eyes staring deeply into theirs as if seeking a connection – a spine-tingling wildlife experience without peer.

Gorilla tracking should not present a serious physical challenge to any reasonably fit adult whatever their age, but the hike can be tough going. Exactly how tough varies greatly, and the main determining factor is basically down to luck, specifically how close the gorillas are to the trailhead on the day you trek (1–2 hours is typical, anything from 15 minutes to 6 hours possible). Another variable is how recently it has rained, which affects conditions underfoot – June to August are the driest months and March to May are the wettest. The effects of altitude should not be underestimated. Tracking in Bwindi usually takes place at around 1,400–2,000m above sea level, but in the Virungas the gorillas are often encountered closer to 3,000m – sufficient to knock the breath out of anybody who just flew in from low altitude. For this reason, travellers might want to leave gorilla tracking until they’ve been in the region for a week and are reasonably acclimatised – most of Uganda lies above 1,000m.

Trackers must meet (with passport or photocopy thereof to hand) at the relevant trailhead at 08.00 and will be given a short briefing about what to expect before they depart into the forest. It is no longer the case that permits specify which gorilla group you will track. At trailheads servicing more than one habituated group, however, the rangers usually do their best to allocate older or relatively unfit-looking trackers to whichever group they expect to be easiest to reach on the day, so if you need special consideration, best get there a bit early. Take advantage when the guides offer you a walking staff  before the walk; this will be invaluable to help you keep your balance on steep hillsides. Once on the trail, don’t be afraid to ask to stop for a few minutes whenever you feel tired, or to ask the guides to create a makeshift walking stick from a branch. Drink plenty of water, and do carry some quick calories such as biscuits or chocolate. The good news is that in 99% of cases, whatever exhaustion you might feel on the way up will vanish with the adrenalin charge that follows the first sighting of a silverback gorilla!

In all reserves, ordinary trackers are permitted to spend no longer than 1 hour with the gorillas (people who sign on for the habituation experience can stay for up to 4 hours). Above all, do bear in mind that gorillas are still wild animals, despite the ‘gentle giant’ reputation that has superseded the old King Kong image. An adult gorilla is much stronger than a person and will act in accordance with its own social codes when provoked or surprised. Accidents are rare, but still it is important to listen to your guide at all times regarding the correct protocol in the presence of gorillas.

BINP is also one of the finest birding destinations in Uganda, thanks in part to the presence of 23 Albertine Rift Endemics, while other attractions include forest walks in search of smaller primates such as black-and-white colobus and L’Hoest’s monkey. There are also a few reputable cultural programmes that offer the opportunity to interact with the Batwa Pygmies who were evicted from the forest interior following the gazetting of the national park.