Occasionally a dervish will break off and start twirling, spinning on one foot and lost in his own personal path to God. 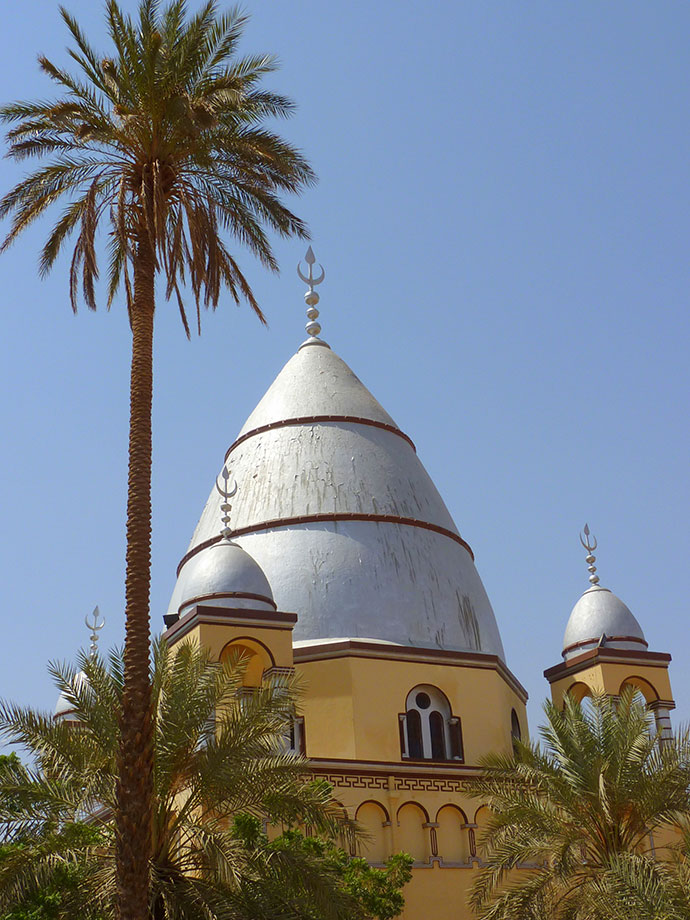 Sheikh Hamed al-Nil was a 19th-century Sufi leader of the Qadiriyah order (tariqa), and his tomb is the weekly focus for Omdurman’s most exciting sight – the dancing and chanting dervishes. Each Friday afternoon at around 16.00, adherents of the tariqa gather to dance and pray, attracting large crowds of observers and participants. A trip to see the dervishes should be a highlight of any visit to Khartoum.

The ceremony starts with a march across the cemetery to the tomb of the sheikh. It’s an amazing sight as the dervishes carry the green banner of the tariqa, their appearance a world away from the restrained white robes of most Sudanese. Instead, the jallabiyas are a crazy patchwork of green and red, often topped off with leopard skin, chunky beads and dreadlocks. As they march, they chant, accompanied by drums and cymbals. Outside the tomb, a large open space is cleared for the dervishes and the banner is raised for the ritual to begin. The pace of the chanting picks up, and the dervishes start to circle the clearing, bobbing and clapping.

The purpose of the frenzy is a ritual called dhikr. The dhikr relies on the recitation of God’s names to help create a state of ecstatic abandon in which the adherent’s heart can communicate directly with God. This personal communication with God is central to Sufi practices. The Sufis are often called ‘whirling dervishes’ but that’s really a bit of a misnomer. Most are content to parade around the circle chanting and clapping. Occasionally a dervish will break off and start twirling, spinning on one foot and lost in his own personal path to God. As they march, the dervishes repeatedly chant La illaha illallah, meaning ‘There is no God but Allah’, the first line of the Muslim profession of faith. Around the edge of the circle other adherents clap and join in the chanting, creating a highly charged and hypnotic atmosphere. The chanting can last for up to 45 minutes. At the end of the ritual, the dervishes break off and enter the mosque to pray in the orthodox Islamic manner.

With Sufism so important to Sudanese Islam, dhikr rituals like this play a major role in religious life. There is a real festival air around the dhikr. Beside the tomb there are tea stalls and adherents selling Sufi pamphlets and tapes; before the ritual starts there is often drumming and chanting inside the tomb itself, and food provided for the needy.

Photography is allowed, but it’s best to be discreet. Don’t dash into the circle to fire off a couple of shots – the dervishes use ritual and atmosphere as the centre of their ceremony, and so shouldn’t be interrupted in any way. This is an active religious community, not a tourist attraction. If in doubt, ask for permission.

To reach the tomb, go to Arabi Bus Station and ask for the minibus heading to Hamed al-Nil; the bus ride should take around 20 minutes. The onion-domes of the tomb and mosque are clearly visible from the road. Get there in plenty of time; the ritual starts around an hour before sunset on Friday. NB: The dervishes do not gather during Ramadan or Eid.