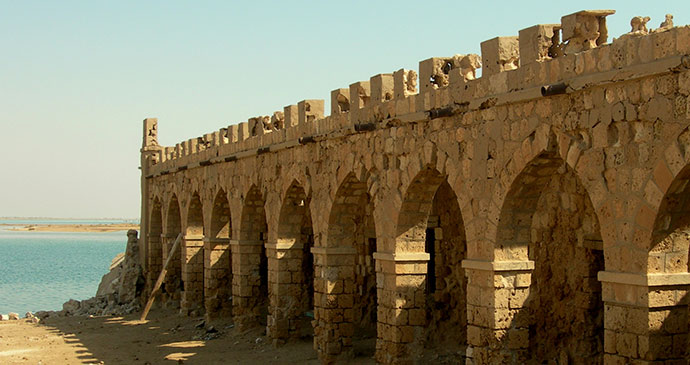 Hunt for djinns and ghosts of slaves on Suakin Island.

Legend has it that Suakin was once the home of magical spirits: King Solomon imprisoned a djinn (genie) on the island. A ship full of Ethiopian maidens was on its way to visit the Queen of Sheba when a storm blew it off course to Suakin. When it finally set sail again, the virginal girls were astonished to discover themselves pregnant, carrying the seed of the supernatural host.

Most of Suakin’s visitors were the victims of other, worldlier transgressions. Slaves raided from the southern fringes of the Sudanese state – Bahr al Ghazal and along the White Nile – were brought here to be shipped to the markets of Jeddah and Cairo. The Funj, Ottomans and Egyptians all prospered from the trade. The first European to record his impressions of Suakin was the explorer John Lewis Burckhardt, who in 1814 found it a place of ‘ill-faith, avarice, drunkenness and debauchery’. Around 3,000 slaves annually passed through Suakin, including Burckhardt’s own slave whom he sold at the market.

Suakin owed its success to its lagoon location, which was ideal for the shallow draught of Arab ships. A 3km channel was eventually cut through the surrounding reef to improve access. The coral that was dredged up was cut into blocks and used in the construction of the island’s buildings. These were then bolstered with wooden pillars and covered with plaster. A causeway was built in 1880 under the orders of General Gordon to link the island to the mainland. The town’s gate, 1km inland in a straight line from the causeway (and conveniently next to the minibus stand), also dates from this period.

Since the abandonment of the port 100 years ago, Suakin has been decaying rapidly. The island itself is deserted, and you can have the place pretty much to yourself. Most of the buildings are in terrible shape. One of the best-preserved buildings is Khorshid Effendi’s House, on the northeastern side of the island, which was occupied by Kitchener in the run-up to his campaign against the Khalifa. The fine wooden mashrabiya screens that covered the windows and allowed the female occupants to look out without being observed are long gone, but there is still evidence of the building’s fine decorative stucco. Two other well-preserved buildings are the Hanafi and Shafai mosques, with their distinctive stubby minarets. They were restored during the Turkiyah, but probably date from at least the 16th century. Along the western side of the island is the skeleton of a huge warehouse, a clearing house for both goods and people. Opposite the northern tip is the modern ferry terminal, still re-enacting the pilgrim route to Arabia.

This is one historical site in Sudan that doesn’t require a permit to enter, although the authorities manage to make up for this by charging a steep SDG10 to visit the island. There is a small office at the end of the causeway where you will be asked to buy a ticket.