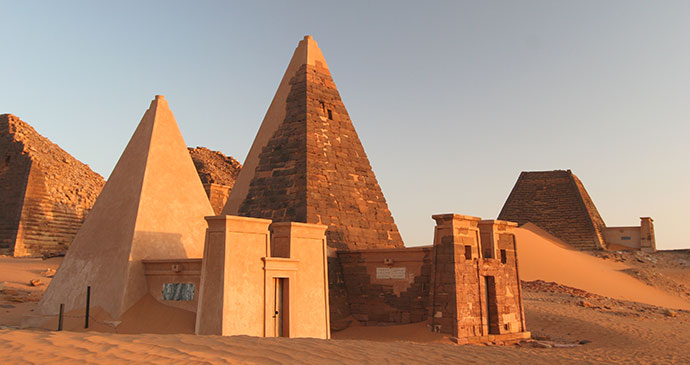 At Meroë the charm of the unknown is the great attraction – visitors can enjoy the rare sensation that they are discovering a long-hidden secret, without a tout offering a camel ride or belly dance in sight. Instead, it’s just you and the pyramids alone in the desert.

Clearly visible from the Khartoum–Atbara highway, the pyramids of the Royal Cemetery of Meroë stand alone on a sandy ridge like a row of broken teeth. They are Sudan’s most popular tourist attraction, although in a country where tourism is in its infancy, popular is a relative term – you are still likely to have the site to yourself. The headline-grabbing treasures of Egypt have long overshadowed Sudan’s ancient history, but at Meroë the charm of the unknown is the great attraction – visitors can enjoy the rare sensation that they are discovering a long-hidden secret, without a tout offering a camel ride or belly dance in sight. Instead, it’s just you and the pyramids alone in the desert.

The site is divided into two main clusters – the Northern and Southern cemeteries. In total there are around 100 pyramids, although many of those are poorly preserved or exist only in outline traces. The South Cemetery is the older cluster, dating to around the 8th century BC, and the first kings who made the move from Nuri to Meroë were entombed here. Kings and queens continued to be buried at Meroë until the fall of Kushite rule in the 4th century AD.

While clearly Egyptian in inspiration, the pyramids are quite unlike those at Giza. The most notable difference is in size and pitch. The largest pyramid at Meroë is just under 30m high (or would have been were it still intact) with an angle approaching 70°. The smaller size allowed the pyramids to be constructed much faster and with less manpower, using simple cranes. Tomb chambers were dug directly into the rock below and the pyramid then erected above – a marked difference to Egypt, where the tomb is enclosed in the body of the pyramid. The pyramids have a rubble core encased in local sandstone (or brick towards the end of the Kushite period). The pyramids were then covered with a render of lime mortar to give a smooth gleaming surface, and the bases were simply painted in red, yellow and blue stars. On the eastern face each pyramid has a funerary chapel where offerings could be made to the dead.

The Northern Cemetery is the better preserved, and contains over 30 pyramids in various states of repair. Most have been decapitated. Their sorry state is largely the work of an Italian treasure hunter, Guiseppe Ferlini, who passed through in 1834. Ferlini was convinced that the pyramids contained great riches, and with the tacit support of the Turco-Egyptians, proceeded to pull them down. He struck gold on his first attempt. In Pyramid 6, that of Queen Amanishakheto, Ferlini found a hoard of jewellery in a chamber near the tomb’s apex. This was highly unusual, as grave goods were normally placed with the body in the tomb chamber beneath the pyramid. Thus inspired, Ferlini laboured on with his destruction only to come up blank – his greatest haul after this was nothing grander than some workmen’s tools. The gold, showing distinct Hellenistic influences, eventually found its way to the Egyptian museums in Berlin and Munich, while Sudan was left with a field of smashed pyramids.

Earlier damage was done by the tomb robbers of antiquity. As a result, comparatively little is known about royal funerary practices. Bodies were probably entombed facing east to greet the rising sun. The funerary chapels contain a mix of passages from the Egyptian Book of the Dead and offering scenes, often with Isis in attendance. At the centre of the Northern Cemetery is a small modern pyramid, its bright colour in stark contrast to the chocolate brown of its neighbours. This was restored in the 1980s as an exercise to recreate Kushite building techniques; its smooth rendered exterior gives some idea of how the pyramids would originally have appeared.

The older Southern Cemetery sits 500m south of the Northern cluster. There are over 60 smaller pyramids here, all belonging to the elite of Meroë. Many are totally ruined or lost altogether. A third, western, cemetery also contains noble tombs, including several well-preserved or reconstructed pyramids. Despite the otherwise apparent absence of people, it is sometimes possible to buy souvenirs from craftsmen outside the pyramids.