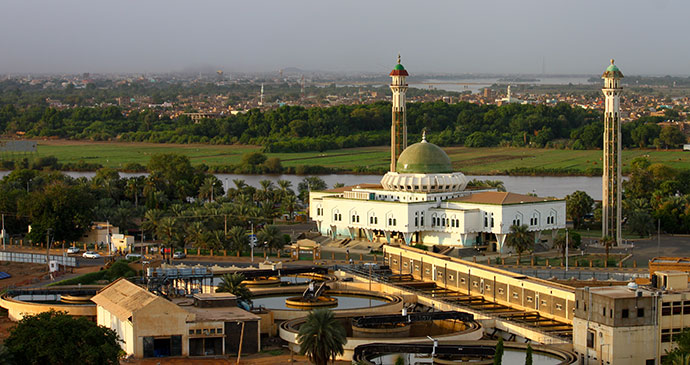 Khartoum remains one of Africa’s most laid-back capital cities, but these days there’s the faintest hint of an African Dubai in the wind, albeit with added chaos and camels.

Sitting at the place where the waters of the Blue and White Niles meet before continuing their slow progress to Egypt, Khartoum has a fantastic setting. It’s a melting pot of the many ethnic groups that make up Sudan, and to sit at a tea stall watching the world pass by is to watch a progression of tribes and nationalities, from Arab, Dinka and Shilluk to Nubian, Beja and Fur.

Khartoum is actually three cities in one. The oldest part – Khartoum proper – sits between the confluence of the Blue and White Niles. On the west bank is Omdurman, the old Mahdist capital, and on the north bank the semi-industrial city of Khartoum North (also sometimes called Bahari).

Khartoum used to bear the unflattering moniker ‘the world’s largest waiting room’. The capital of a dry country, it was a quiet, relaxed city where nothing much seemed to happen, and no-one was in a hurry to do it. While that’s still true to some extent, Khartoum has changed massively in recent years, due mainly to oil wealth. The city is now plugged into the global markets, with huge investments being made from China and the Gulf States. Top-end hotels have sprung up, suburban housing developments have sprawled, and new bridges have been thrown across the river. The Sunt Forest, an area of scented acacias near the Nile Confluence, has been ripped up to make way for a colossal business park. At the same time, the expat population has swollen considerably, due to international development organisations relocating into the city and the constant influx of Chinese oil workers. The much-anticipated population exodus following the secession of South Sudan has not materialised, largely due to ongoing fears about security and the financial costs of relocation.

Khartoum has been witness to the many coups that have shaped Sudan’s post-independence history. Its large European (mainly Greek) population has mostly disappeared, the last exodus prompted by Nimeiri’s establishment of sharia law in 1983 and the coup that brought the Islamists to power in 1989. In response to the bombing of the US embassies in east Africa, US president Bill Clinton ordered a cruise missile attack on a pharmaceutical factory in Khartoum North in August 1998, although there has subsequently been no evidence that it was involved in manufacturing chemical weapons as alleged. The population of Khartoum increased massively as a result of the civil war. Displaced people’s camps filled with Southerners, and later Darfuris, sprung up around the edges of the city, although many Southerners have now returned home after the signing of the Comprehensive Peace Agreement (CPA) and secession of South Sudan in 2011. Inward investment from China and the Gulf has changed the skyline in the last few years, creating a greater feeling of optimism amongst many of the city’s residents.

Khartoum is still as friendly and safe as it ever was, and remains one of Africa’s most laid-back capital cities, but these days there’s the faintest hint of an African Dubai in the wind, albeit with added chaos and camels.