Over time the temple grew to over 150m in length, making it the largest Kushite building ever built. 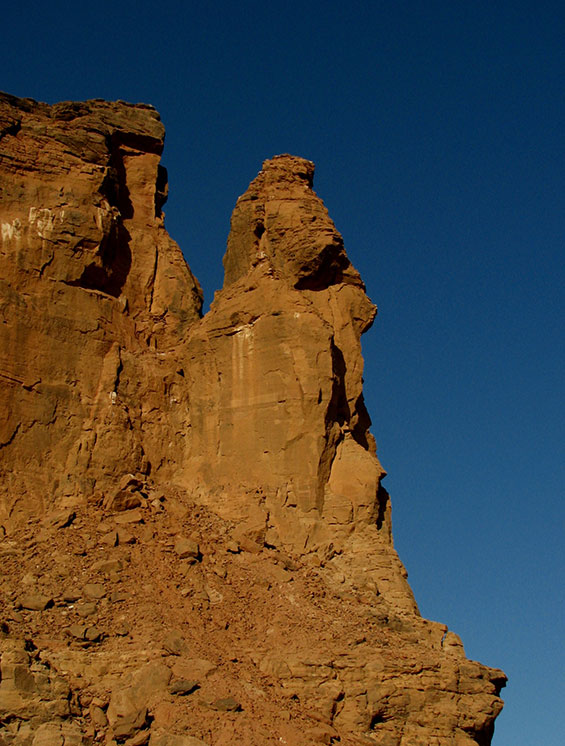 The holy mountain of Jebel Barkal (Jebel Barkal actually means ‘holy mountain’ in Arabic), a great sandstone butte that dominates this stretch of the Nile, is situated 2km southwest of the centre of Karima (a 15-minute walk or SDG5 in a rickshaw). The ancient Egyptians and Kushites alike believed that the mountain was the home of the god Amun, the ‘Throne of Two Lands’ – Egypt and Nubia. The ruins of a temple dedicated to the god lie at the foot of the mountain. At dawn or dusk, Jebel Barkal still evokes a phenomenal aura and it’s easy to understand why the ancients ascribed such religious significance to it.

Thutmose III, one of the first Egyptian kings to penetrate this far south, built the first Temple of Amun in the 15th century BC. Later pharaohs, including Rameses II, expanded it, turning it into an important cultural centre, as well as a way station for goods from the south destined for the great Temple of Amun at Karnak. When Egyptian influence waned the temple fell into disrepair.

The rise of the Kushites changed the fortunes of the whole region. Jebel Barkal became the centre of the new kingdom and its kings resurrected the worship of Amun. In around 720BC Piye led his armies north into Egypt and captured Thebes. Ownership of the Temple of Amun gave legitimacy to his claim to be the true representative of Egyptian traditions; his successors set up the 25th Dynasty and ruled from Thebes and Memphis as pharaohs. Piye greatly expanded the temple at Jebel Barkal, as did his son, Taharqa. Over time the temple grew to over 150m in length, making it the largest Kushite building ever built.

The temple stretches out towards the Nile, near the bottom of a freestanding pinnacle of rock cracked from the sandstone cliffs. The significance of this pinnacle has puzzled archaeologists for decades. An early observer supposed that it was to have been a giant statue of a pharaoh, far surpassing anything in Egypt at 90m high. A more likely explanation is found in its profile, which (albeit roughly) resembles an ureaus – the protective cobra and symbol of the king. A relief in Rameses II’s massive temple at Abu Simbel in Egypt shows Amun sitting inside a mountain, faced with a rearing cobra. This iconography is found in later Kushite art and almost certainly represents Jebel Barkal. In the 1990s, archaeologists discovered a niche at the summit of the pinnacle carved with hieroglyphics proclaiming Taharqa’s military campaigns against his enemies. This was completely inaccessible (except to the gods) so would have been covered with a gold panel, allowing it to reflect in the light and provide a beacon for miles around. The light of Jebel Barkal would have been clearly visible from Taharqa’s pyramid upstream at Nuri.

The temple is very ruined and much of the structure is covered with sand, but the ground plan is still clear, with a procession of two large colonnaded halls leading into the sanctuary at the base of the mountain, surrounded by several small rooms. At the southern entrance of the temple there are several wind-worn granite statues of rams; these were actually from Soleb further downstream and have been relocated here. There are many scattered blocks covered with reliefs and hieroglyphics.