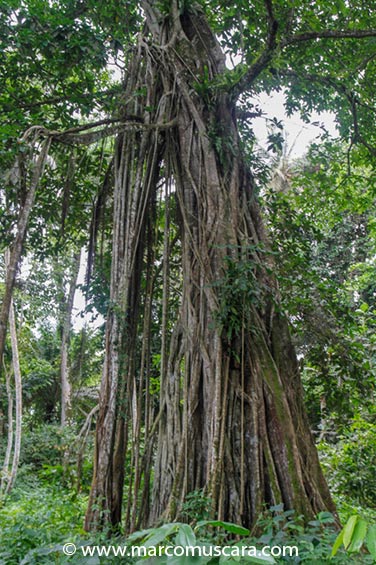 Covering an area of 1,657ha, Roça Sundy is the biggest plantation on the island and gives you a real idea of how self- sufficient some roças once were. This was the only coffee-producing plantation on Príncipe. The governors’ house is no longer open to visitors, as it will serve as offices for new owners, HBD, who are planning plantation accommodation here too. Roça Sundy is some 10km from the capital, and it takes a good while to walk all the way uphill, so start early in the day to take in the beaches as well as look round the plantation.

The former hospital is to your left as you come in the entrance, majestically flanked by two towers. Kids will be happy to show you the only thing that is left from the time when this was the most important hospital on the island: an old dentist’s chair. (They might also request your empty plastic water bottle.) Next to the hospital, a marble plaque in the middle of a field commemorates the experiments conducted here by British astronomer Arthur Eddington in 1919, proving Albert Einstein’s relativity theory for the first time.

(Photo: A large gnarled tree at the Sundy plantation, where Einstein’s theory of relativity was first proven, in Príncipe © Marco Muscarà, www.marcomuscara.com)

During a total solar eclipse, Sir Arthur demonstrated that gravity would bend the path of light when a massive star passes it and published the results as ‘A Determination of the Deflection of Light by the Sun’s Gravitational Field’. Behind the governors’ house a few panels put up during an astronomers’ convention to celebrate the 90th anniversary of the experiment explain the science in simple terms.

Visit the historic Sundy plantation, the biggest plantation on Príncipe, where Einstein’s theory of relativity was first proven.

The plantation belongs to the state, and the former owner’s house is kept, waiting for state visits. There are gorgeous views out to sea from the balcony and the colour co-ordinated bedrooms upstairs. The green one, closest to the bathroom and furthest from possible intruders, was the president’s; his bodyguards slept in the red and blue rooms. The whole place, with a large rectangular tree-lined square at its centre, is surrounded by a crenellated wall; over on the other side of the square, the former stables have beautiful horseshoe-shaped windows.

Railway tracks can still be seen in the soil, with a rusting locomotive. Today, around 400 people live here – of whom about ten have a job in town. The simple chapel, dedicated to Our Lady of Lourdes, contains a beautiful crucifix. The church is not open; ask for the key (chave) locally. The way down to Sundy beach (and the other nearby beaches) starts next to the chapel; get an older kid to show you the way. In the workers’ quarters you can also stock up on picnic food for the beach or provisions for the way back in one of the lojas. You might see some pet monkeys for sale. The plantation does not have mains electricity, but there are a few generators.