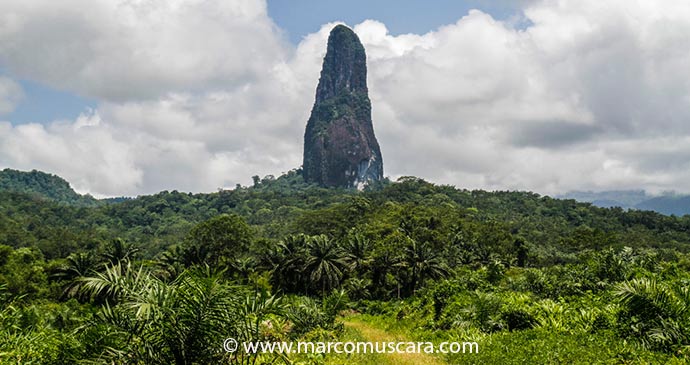 The mighty Pico Cão Grande in São Tomé and Príncipe, located in the southern-central section of the park © Marco Muscarà, www.marcomuscara.com

One of the aims in creating the park in 2006 was to stop agricultural land from encroaching further on the important forest habitats around the crater lake. Continuing up, the path is strewn with beautifully coloured leaves and discarded monkey nuts; ask the guide to point out the most distinctive trees, such as the Cubango tree (used to ward off the evil eye), for instance. Note that some trees have wooden identification plaques. Take your time exploring, as the beauty of this walk lies less in the Lagoa itself as in the rich bird- and plantlife encountered on the way; it might be a good idea to make clear early on that you will be stopping frequently.

Apart from the common endemics, look out for the maroon pigeon, the São Tomé scops owl, the giant sunbird, the São Tomé oriole and the São Tomé white-eye. ‘Amelia Lagoon’ is not a lake anymore, but a filled-in crater surrounded by trees and giant begonias. There is a sign asking you not to step on the spongy grass, topping a 3m layer of rainwater, which most visitors ignore, of course. You may see some São Tomé spinetails flitting across, hunting flying insects. There is the possibility of camping at the weather station just before you walk down to the crater; there is not much shelter, but it would be a wonderful opportunity for early-morning birding in the middle of the primary rainforest.