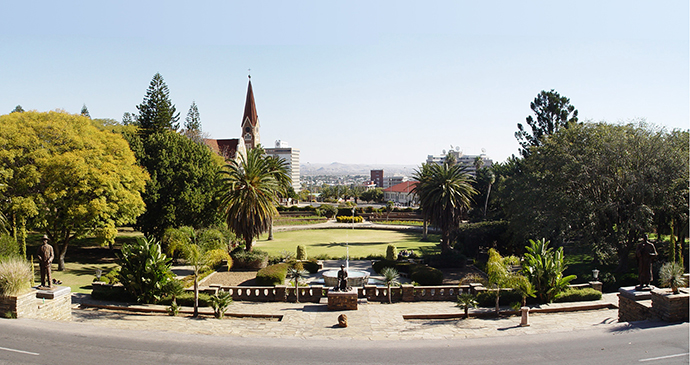 As you stroll through this centre, the pavement cafés and picturesque old German architecture conspire to give an airy, European feel, while street vendors remind you that this is Africa.

Namibia’s capital spreads out in a wide valley between bush-covered hills and appears, at first sight, to be quite small. Driving from the international airport, you pass quickly through the suburbs and, reaching the crest of a hill, find yourself suddenly descending into the city centre. As you stroll through this centre, the pavement cafés and picturesque old German architecture conspire to give an airy, European feel, while street vendors remind you that this is Africa. Look upwards! The office blocks are tall, but not skyscraping. Around you the pace is busy, but seldom as frantic as Western capitals seem to be.

Leading off Independence Avenue, the city’s main street, is the open-air Post Street Mall, centre of a modern shopping complex. Wandering through here, between the pastel-coloured buildings, you’ll find shops selling everything from fast food to fashion. In front of these, street vendors crouch beside blankets spread with jewellery, crafts and curios for sale. Nearby, the city’s more affluent residents step from their cars in shaded parking bays to shop in air-conditioned department stores.

Like many capitals, Windhoek is full of contrasts, especially between the richer and poorer areas, even if it lacks any major attractions. For casual visitors the city is pleasant; many stop for a day or two, as they arrive or leave, though few stay much longer. It is worth noting that much of the city all but closes down on Saturday afternoons (although some shops open on a Sunday morning), so be aware of this if you plan to be in town over a weekend.

Note, too, that during the holiday season, from Christmas to around 10 January, large numbers of locals head for the coast, leaving many shops, restaurants and tourist attractions closed. That said, this is the centre of Namibia’s administration, and the hub of the country’s roads, railways and communications. If you need an embassy, good communications or an efficient bank, then Windhoek is the right place for you. And to prepare for a trip into the bush, Windhoek is by far the best place in Namibia to get organised and buy supplies.