Scenically, Niassa is hugely impressive, dominated by the Lugenda River, whose shallow perennial flow is hemmed in by wide sandbanks and a ribbon of lush riparian forest.

Situated in the remote north of Mozambique bordering Tanzania, Niassa Reserve is Africa’s third-largest wildlife sanctuary, extending over 42,000km2 – that’s twice as large as the Kruger Park, almost three times the size of the Serengeti, or (to place it in a non-African context) comparable in area to Denmark or the state of Massachusetts. Niassa is also one of Africa’s most under-publicised and unvisited safari destinations, as well as one of the most important protected areas in Mozambique, and is considered a critical wildlife area for Africa. While the reserve’s isolation has held back development, it has also allowed it to retain an untrammelled feel that is increasingly rare in modern Africa. 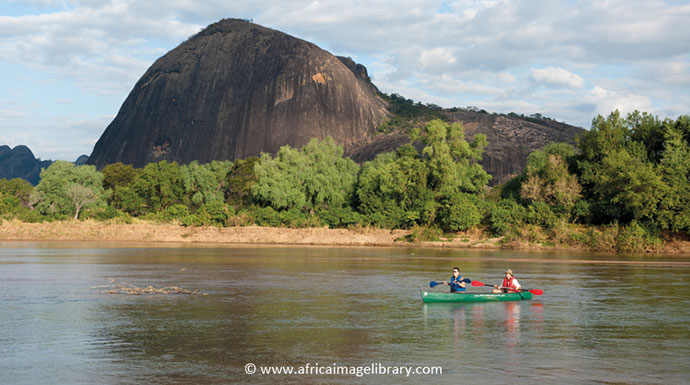 Scenically, Niassa is hugely impressive, dominated by the Lugenda River, whose shallow perennial flow is hemmed in by wide sandbanks and a ribbon of lush riparian forest. Away from the river, there are vast tracts of miombo woodland studded with bulbous fleshy grey baobabs, and immense granite inselbergs that rise majestically into the deep blue African sky, hundreds of metres above the surrounding plains.

It should be stated clearly that Niassa is not a suitable safari destination for those seeking a quick ‘Big Five’ fix. True, all but one of this much-hyped quintet is present here in significant numbers (the exception being rhinos, who were poached to extinction in the 1980s) but the only near-certainty in the course of a standard three-to four-day visit would be elephant. What Niassa offers is an altogether more holistic wilderness experience, one in which the reserve’s mesmerising scenic qualities and wonderfully rich birdlife figure as prominently as its mammalian wildlife.

This is also one of those rare reserves where activities need not be dominated by motorised game drives: guided game walks offer the opportunity to experience the African bush as its inhabitants do, on foot, without the constant roar of an engine providing an unwanted aural backdrop; while canoeing on the river – past spluttering hippos, drinking elephants and a splendid array of birds – is utterly entrancing. In short, Niassa offers as untrammelled an African bush experience as still exists in the 21st century.