Situated about 35km from central Maputo, Inhaca is a dislocated extension of the narrow peninsula that runs northward from Maputo National Park to Cabo Santa Maria, from which it is separated by a shallow channel just 500m wide. Effectively forming the shore of Maputo Bay, Inhaca is among the most accessible of Mozambique’s many offshore islands, and ideally situated for a short break from the capital.

It luxuriates in an archetypal tropical island atmosphere, with a couple of good beaches, a mangrove-lined north coast and brightly coloured reefs off the west coast. The main tourist focus is Inhaca village, a tiny settlement dominated by a centre dotted with bars. The beach directly in front of the lodges is an interesting place to sit and watch the boats as the sun goes down. 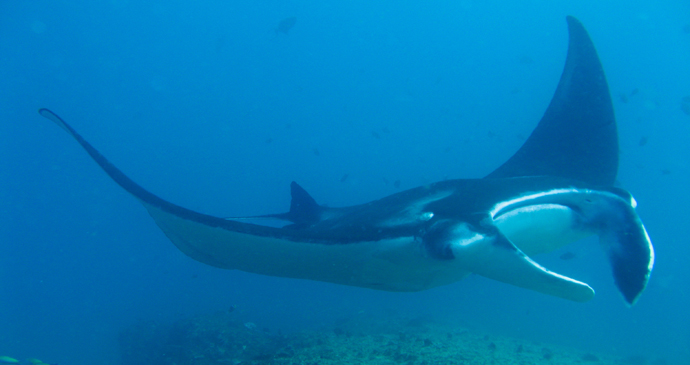 The world’s largest ray, which can boast a 7.5m wingspan, manta rays can be found in the waters around Inhaca Island © Kim Briers, Shutterstock

Away from the village, the beaches on both the western side of the island (facing Maputo) and its eastern side (facing the Indian Ocean) are utterly deserted, and offer mile after mile of sun-kissed, wave-swept sand. The reefs of Inhaca are among the most southerly in Africa and, as the water in the gulf is 5°C warmer than elsewhere at this latitude, the island has been a centre of scientific research since 1921. The island is host to nearly 300 species of birds, while 490 fish species and more than 70 types of coral live in the surrounding waters.

What to see and do on Inhaca Island

Inhaca has been a centre of scientific research since 1951. An interesting marine biology research station run by Maputo’s Eduardo Mondlane University lies to the south of Inhaca village, along with a well-kept museum of natural history (US$2.50). The museum has a complete skeleton of the endangered dugong, as well as many varieties of marine life preserved in fluid.

In 2016, with renewed investment, the station built a new residential building for graduate and resident researchers, and received a new research vessel as well as equipment required for its continued work in the Indian Ocean. For those with a strong interest in the island’s ecology, it’s worth trying to get hold of a copy of The Natural History of Inhaca Island, a 395-page book that includes comprehensive species descriptions of the fauna and flora as well as line drawings depicting the more common species.

A good walk (around 3 hours each way), through grassland, local fields, salt flats and mangroves to the northern tip of the island. Take the road south of the airport and keep checking with the people you meet – asking ‘O caminho para farol?’ and pointing should do the trick. You must take water.

The lighthouse is now derelict and closed but the beaches are well worth a visit, being both deserted and vast. If you’re interested in riding the surf, you’ll need to head here, but given the distance you might prefer to organise a lift. Ask at your accommodation or in the village for transport options; return fare is around US$35.

You can walk all the way around the island should you wish, but a good alternative is to take the west side from the jetty down to the marine station – mile after mile of perfect deserted beach. It’s worth stopping every now and again just to listen to the waves on the shore and the wind in the palm trees.

It’s almost impossible to believe that you’re only a short distance from Maputo, until you look to the horizon where you can still make out distant buildings gleaming in the sunlight. The walk takes 1½–2 hours each way, and check the state of the tide – it may not be passable at high spring tides, and there are one or two places where you’ll need to scramble over rocks, so sandals are a good idea.

With more than 300 species recorded in an area of only 40km², Inhaca offers some very good birding, with a variety of marine species alongside those more associated with coastal thickets and scrub. Among the most striking or beautiful species associated with vegetated habitats are the African fish eagle, trumpeter hornbill, green pigeon, Narina trogon, African hoopoe and green twinspot, while the sandy shores of the island often host large mixed groups of migrant and resident waders, ranging from the localised crab plover, flamingoes and bulky curlew to diminutive sandpipers and stints.

Pelicans and cormorants are common around the bay, while offshore birds, most likely to be seen in flight, include half a dozen species of tern (including the localised black-naped tern), three types of skua, Cape gannet and Pintado petrel.

A small island to the north of Inhaca itself, this island is now a protected area, managed by the Marine Biology station on Inhaca. In Portuguese colonial times it was a leper colony, and there are supposedly some ruins from those days, although they haven’t been found again since the 1960s. The beaches tend to be very flat with large sandbanks at low tide.

Take a boat from Inhaca – ask at the lodges for help arranging this. The best swimming beach is the one facing Inhaca, but it is dangerous to swim out too far as the current is very strong. You can walk round Ilha dos Portugueses in approximately 1½ hours.

There is only one regular boat service between Maputo and Inhaca: a government-run slow ferry, known as the Nyelete. The government has promised a new ferry to service Inhaca Island, but in the meantime the Nyelete will continue to make its rounds every Monday, Wednesday, Friday, Saturday and Sunday. It leaves from the end of the jetty on Avenida 10 de Novembro (where the Katembe ferry docks) at 07.30 (11.00 Fri), but you’re strongly recommended to get there at around 06.45 as departure can depend on the tide.

Alternatively, Safari Air Limitada can be hired for a 15-minute charter flight from Maputo to Inhaca Island; fares vary according to number of passengers and size of airplane available – enquire for details.