The town of Moçambique, which occupies the small offshore coral island of the same name in Mossuril Bay, is the oldest European settlement on the east coast of Africa, and also perhaps the most intriguing and bizarre.

Measuring about 3km from north to south and at no point more than 600m wide, crescent-shaped Ilha de Moçambique (Mozambique Island) was the effective capital of Portuguese East Africa and the most important Indian Ocean port south of Mombasa for almost four centuries.

It houses several of the southern hemisphere’s oldest extant buildings, including the Fortaleza de São Sebastião, the former Convent of São Paulo and a trio of handsome churches. In 1991, the entire island was inscribed as Mozambique’s first (and thus far only) UNESCO World Heritage Site, in recognition of its numerous old buildings and singular architectural cohesion, and it surely ranks as the country’s most alluring urban destination for travellers.

The overall feel of Ilha de Moçambique remains isolated, old-world and not too touristy. Indeed, from that perspective, there may never be a better time to visit the island, poised as it is at a most appealing point along the trajectory between the backwater it had become at the end of the civil war, and the fully developed tourist hub – a kind of southern African counterpart to Zanzibar – that it seems to be heading towards becoming in the not-too-distant future.

What to see and do on Ilha de Moçambique

Dominating the northern tip of the island, the Fortaleza de São Sebastião (Fortress of Saint Sebastian) is arguably the most formidable edifice of its type in Africa. Measuring up to 20m high, it was built of dressed limestone shipped from Lisbon between 1546 and 1583 as a response to the Turkish threat of 1538–53. The shape of the fort has changed little over the intervening centuries, though all but one of the three original entrances, the impressive extant gate beneath the buttress of Santa Barbara, were walled up before 1607.

The fort remains in remarkably good condition, and its wells are still the only source of fresh water on the island. The roof is the best example on the island of the rainwater collection system that sends water flowing into the cisterns. Protected within the fortress, the Capela da Nossa Senhora do Baluarte (Chapel of Our Lady of the Ramparts) is the island’s only other 16th-century building to have survived to the present day. 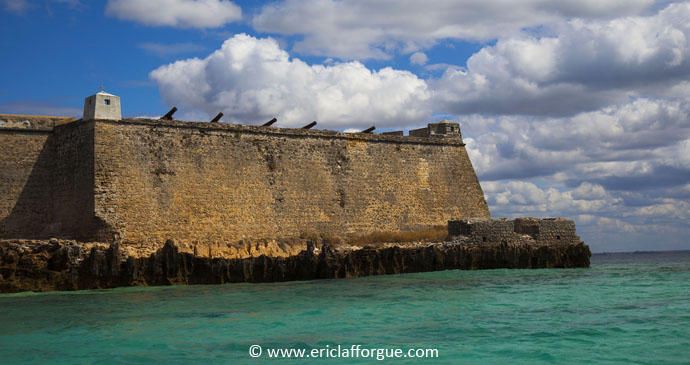 Within the fortress walls, a new museum, the Museum of Maritime History, is now open. You need to ask when paying the entrance fee to the Palace Museum, and they’ll take you through. The first exhibition is to bring to light the evidence that Ilha was trading with Asia in the millennium before the Europeans arrived.

The museum is the result of a collaboration between UNESCO, The Smithsonian Institute and Mozambique’s Eduardo Mondlane University as part of the Slave Wrecks Project, which aims to uncover and humanise the history of the global slave trade.

When the Dutch evacuated Ilha de Moçambique in 1607, they burned the old town to the ground, destroying the Muslim quarter as well as two churches and the hospital, and sparing only the Portuguese-held fortress of São Sebastião and the church that is protected within its walls. In 1671, the Omani Arabs again razed much of the old town following their short-lived occupation of the island, for which reason the only extant 17th-century building in the old town is the former Jesuit College of São Paulo.

Today, the former palace is a museum and a fascinating place to explore. The original church, which was formally opened in 1640, is worth looking at for its garish pulpit, a cylindrical wooden protrusion decorated with some beautiful carvings of the Apostles, below which is a chaotic assemblage of rather less lovable but arguably more compelling creatures, a mixture of gargoyles, angels and dragons.

Also notable are the copper-plate altar and the dozen or so religious paintings that decorate the otherwise bare walls. The courtyard separating the church and the palace also has several large statues, for some reason painted in a rather fetching shade of green.

Formerly the Naval Museum but reopened under a new name in August 2009, the Maritime Museum, reached through a door to the right as you leave the Palace Museum (you need to ask the guide to take you to this part of the museum), now focuses on a fascinating collection of artefacts recovered from the Espadarte and Nossa Senhora da Consolação, shipwrecked in the waters off Fortaleza de São Sebastião in 1558 and 1608 respectively, and rediscovered in 2001.

The displays include the richest stash of Ming porcelain ever salvaged in Africa, comprising more than 1,500 pieces, many still in mint condition, whose motifs have been dated to the reign of the Chinese emperor Jiajing (1521–66). Also on display is a hoard of 16th-century gold and silver coins and other material from the two wrecks.

Situated in the same block as the Palace Museum but entered from around the corner (opposite Café-Bar Âncora d’Ouro), this small museum is housed in a wing of the Church of the Misericórdia, which still opens for Mass on Sunday mornings. The Misericórdia (House of Mercy) was a religious organisation with nominally charitable aims and a gift for raising revenue through bequests and later from a large prazo in Zambézia.

The church that houses the Sacred Art Museum served as the island headquarters of the Misericórdia from when it was built in 1700 until the organisation was disbanded in 1915, and the majority of artefacts it contains are the former property of the Church.

It might be difficult to get excited about the dozens of statues of saints displayed in the museum, especially after having spent time in the palace next door. The most unusual artefact is a Makonde carving of Jesus. It would be interesting to know when and how this statue was acquired, since it is very different in style and subject from most other Makonde carvings.

Aside from the fortress and museums, the old town contains several buildings of considerable antiquity and/or architectural merit – indeed, most houses in this part of town are several hundreds of years old, and many have been restored to something approaching their former glory since the turn of the millennium.

The old Capitania (Port Authority) on the Largo de Capitania has an impressive entrance complete with a couple of anchors and a cannon. The old Customs House, alongside the Pontão (pontoon), is a magnificent building that has now been renovated and turned into loft apartments. If you ask the guard, he will usually let you in to have a look around.

There’s a rather stylised statue of the 15th-century Portuguese navigator Vasco da Gama in the Praça da República outside the Palace Museum, while on the east side of the island, about 300m further south, is a similar statue of his approximate contemporary, the poet Luís Vaz de Camões, who is regarded as the Portuguese equivalent of Shakespeare (but had no direct links with Mozambique).

The closest airport with scheduled LAM flights is at Nacala. However, the better option is to fly to Nampula, as the Nacala airport only has three weekly LAM flights from Maputo, whereas Nampula has LAM and Ethiopian Airlines flights daily from around Mozambique, as well as flights from Dar es Salaam, Nairobi (Kenya Airways) and Johannesburg (Airlink) several times a week.

Ilha de Moçambique lies in Mossuril Bay about 170km east of Nampula. It can be reached by following the N1 (EN8) east towards Nacala as far as Monapo, then turning right on to the N105 and following it for 45km to its mainland terminus at Lumbo.

From here, you can cross to the southern end of the island along a 3.5km-long concrete bridge built by the Portuguese in 1969. The bridge is single-lane for most of its length, but it has been widened in about half a dozen places to allow oncoming traffic to pass.

By bus and chapa

If you’re planning to use public transport, local chapas run between Nampula and Ilha de Moçambique daily. These leave Ilha de Moçambique from next to the bridge between 03.00 and 05.00 and from Nampula between 09.00 and noon. Tickets cost US$4.50 and the run takes about 4 hours in either direction.

Leaving Ilha de Moçambique after 05.00, you may need to catch a chapa to Monapo, on the junction with the N1 (EN8), and to change vehicles there. In either direction, transport tends to peter out after midday. Heading northward to Pemba, you will need to change vehicles at Namialo and should aim for the earliest possible start to connect with passing buses from Nampula.