Surrounded by orderly tea plantations and immense granite protrusions, the breezy market town of Gurué sits at an altitude of 720m in the fertile green foothills of the southern Rift Valley. It is the eleventh-largest town in Mozambique, with a population estimated at 145,000, a comparatively moist and cool climate, and an energised, bustling mood absent from many of its more torpid coastal cousins.

Gurué’s relatively temperate climate is a refreshing change from the coastal heat, and the immediate environs offer some good opportunities for relaxed rambling in scenic surrounds (recalling the Mulanje and Thyolo districts of neighbouring Malawi), but the major attraction here is Mount Namuli, one of Mozambique’s premier hiking and birding destinations.

The town itself is of limited architectural interest, mostly dating to the post-World War II era, but there is a rather pretty small chapel, with some colourful murals inside, at the northeast end of Avenida República.

What to see and do around Gurué

Gurué’s biggest attraction is the surrounding countryside, which offers probably the best walking you’ll find in Mozambique. A nice easy walk is to tour the tea plantations that surround the town. Head out of town on the main road north past the hospital and then take the road off to the left and within 5 minutes you’ll be surrounded by tea bushes. It’s an extremely pleasant walk and very photogenic.

A more serious walk is the hike up Mount Namuli, which requires three days/two nights on foot from Gurué, as well as a good head for heights for the final ascent, though theoretically it could be done in a (very rushed) day with a private 4×4 to get you to the base camp.

Mozambique’s second-highest peak at 2,419m, Namuli is a massive granite dome that protrudes a full kilometre above a grassy rolling plateau incised with numerous streams and gorges. The main peak of Namuli lies only 12km northeast of Gurué, but is not visible from the town itself. Several other tall domes stand on the same plateau, and the entire massif comprises almost 200km² of land above the 1,200m contour. 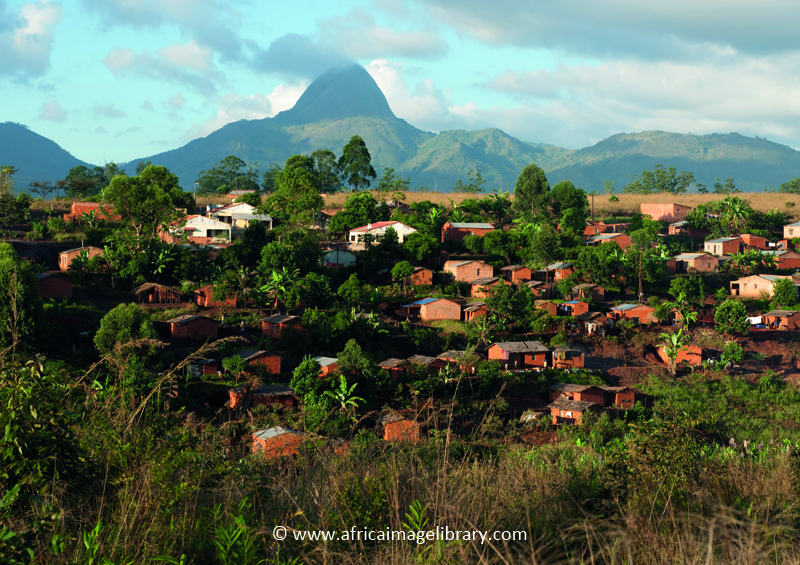 The highland town of Gurué is surrounded by tea plantations and lies at the foot of Mount Namuli, making it an ideal base for hikers © Ariadne Van Zandbergen, www.africaimagelibrary.com

Popular with hikers for its lovely green upland scenery, Namuli is also a mountain of great biological significance, supporting a variety of montane habitats including some 12km² of moist evergreen forest that shows some affiliations to the Eastern Arc Mountains of Tanzania. Two main patches of forest remain: the larger but relatively inaccessible Manho Forest, which borders the Muretha Plateau about halfway between Gurué and Namuli Peak, and the more accessible Ukalini Forest at the southwest base of the granite cliffs below Namuli Peak.

Vincent’s bush squirrel, listed as Critically Endangered by the IUCN, is endemic to these forests, which also support samango and vervet monkey, red and blue duiker, various small carnivores and at least one endemic but as yet undescribed species of pygmy chameleon.

Whether you are there for the scenery or the fauna, the normal springboard for exploring Namuli is the village of Mukunha (also known as Muguna Sede), which lies on the southeast footslopes about 30km from Gurué.

A rough road leads from Gurué to Mukunha, heading north from the Mocuba road just past the hospital, but there is no public transport so, unless you have a private 4×4, the only option is to hike, a beautiful but long and tough trek that takes 8–10 hours and requires a guide; Luis Dos Santos Cotxane has been recommended, and he or another guide can be arranged through Pensão Gurué.

The best known of several spectacular waterfalls on the western side of the massif, the Cascata de Namuli is formed by the Licungo River as it cascades about 100m down a sloping rock face north of Gurué. It is an excellent goal for a day walk, a 5–6-hour round hike out of Gurué that passes through a variety of habitats, including the tea plantations of the Chá Zambezi Estate, stands of bamboo and small patches of indigenous forest, and you can swim in a pool above the waterfall. The riverine forest above the waterfall reputedly shelters the Namuli apalis and other rare birds, but it is unclear whether these range as far down as the waterfall itself.

To get there, follow the road past the Residencial Licungo out of town and keep going – you can’t really go wrong, and if in doubt anybody will point you in the right direction (just ask for ‘cascata’).

The road to the waterfall passes through the tea estate and although no charge is levied to walk to the waterfall, nor is any prior permission required, people driving may be required to park at the estate entrance gate and to do the last stretch on foot (about 1 hour each way).

Situated in the hilly countryside north of Gurué, the Casa dos Noivos is an abandoned hilltop dwelling that must have been very beautiful in its prime, and that still offers one of the most spectacular views in the region, over a rolling series of verdant valleys below Mount Namuli. The origin of its name (literally ‘House of the Bride and Groom’) is unclear: it may be that the house was built for a newlywed couple or simply that it is known locally as a place for romantic assignations.

On foot, the casa can be reached by following the Mocuba road out of town past the hospital, then taking the second road to the left and heading more or less north for about 90 minutes, passing through scenic tea estates en route. If you are thinking of driving, the road is very winding with some vertical drop-offs, so a 4×4 may be necessary, especially after rain.

There are several possible approaches to Gurué. Coming from the direction of the coast, the best is the N103, the surfaced 135km road that branches north from the N1 to Alto Molócuè about 70km north of Mocuba. At least one bus daily covers this route directly from Quelimane, and there are several chapas daily from Mocuba, costing around US$6 and taking up to 4 hours.

Though the N103 is quite scenic, it is eclipsed by the less well-travelled road (R655) from Alto Molócuè to Gurué via Nauela, which is stunning, particularly in the early morning when the mists rise from the valleys to meet the clouds sinking over the shoulders of the mountains.

On public transport, there’s usually at least one daily truck directly between the two, but otherwise you can catch two chapas, one from Alto Molócuè to Nauela and then another from Nauela to Gurué (both cost around US$3 and take up to 3 hours each).