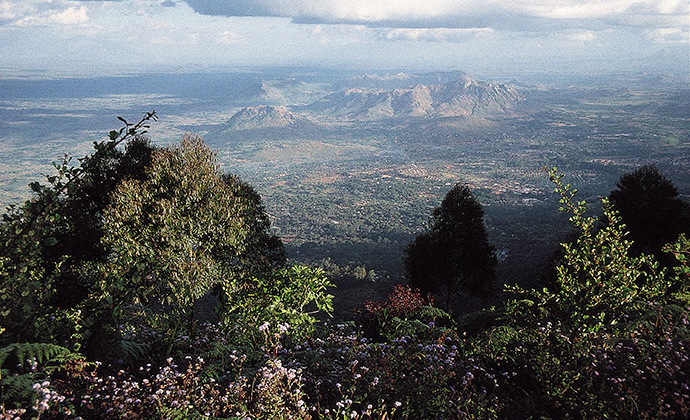 Climb Malawi’s most accessible large mountain for views that stretch to the edge of the world © Malawi Tourism, www.malawitourism.com

The plateau’s northwest rim forms the southern escarpment of the Upper Shire Valley, and is characterised by sheer drops of up to 1,200m, offering spectacular views over the plains below.

Rising to the immediate northeast of the eponymous town, the Zomba Plateau is an isolated syenite protrusion that extends over around 130km² and reaches an altitude of 2,087m at Malumbe Peak in the southwest. The plateau’s northwest rim forms the southern escarpment of the Upper Shire Valley, and is characterised by sheer drops of up to 1,200m, offering spectacular views over the plains below. Much of the plateau is protected in Malawi’s oldest forest reserve (gazetted in 1913), and while much of the indigenous vegetation has made way for pine plantations, it also supports significant patches of indigenous riverine and montane forest, as well as areas of tangled scrub and Brachystegia woodland. A large dam was constructed in 1999 in the bowl of the mountain, but this does little to interrupt the natural feel.

Though it is less spectacular and wild than the larger Mulanje and Nyika plateaux, the upper reaches of Zomba are considerably more accessible, and a vast network of footpaths makes it one of the most popular areas in Malawi for rambling and hiking. For most visitors, Zomba’s scenery is undoubtedly its main attraction, but the mountain also supports a rich birdlife, while mammal species present include elusive populations of leopard, serval cat and mongooses. Antelope present on the mountain include bushbuck, klipspringer and red duiker, vervet monkey and yellow baboon are reasonably common, and the lovely samango monkey is seen in indigenous forests, particularly around Chingwe’s Hole and Zomba Forest Lodge.