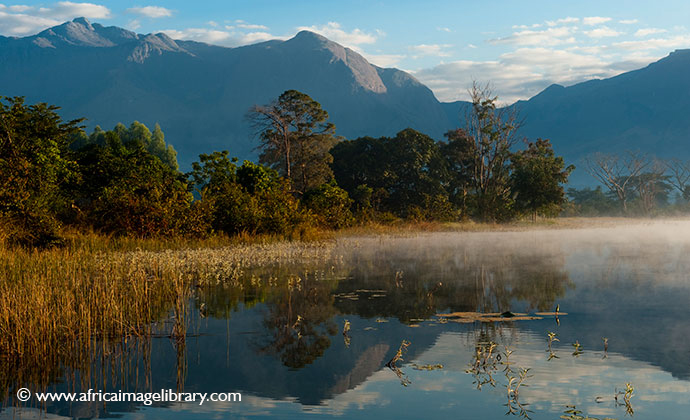 Less than an hour’s drive from Blantyre, Mulanje has long been the country’s premier hiking and rock-climbing destination, popular with residents and tourists alike for its dramatic scenery and well-organised and inexpensive facilities.

Mulanje is a spectacular 650km² granite inselberg that rises in dramatic isolation above the Phalombe Plains southeast of Blantyre. The massif consists of a plateau of rolling grassland set at an average elevation of 2,000m, but this is incised by several thickly wooded ravines, and studded with 20 peaks of 2,500m or higher, including Sapitwa, the highest point in central Africa at 3,002m. By contrast, the plains below Mulanje have a mean altitude of 650m, though the northern slopes are linked to the discrete 2,289m Mount Mchese by the Fort Lister Gap, a mid-altitude saddle with an average elevation of around 950m. Both Mulanje and Mchese are protected within the Mount Mulanje Forest Reserve, which was proclaimed in 1927 and is managed by the Mount Mulanje Conservation Trust (MMCT).

Less than an hour’s drive from Blantyre, Mulanje has long been the country’s premier hiking and rock-climbing destination, popular with residents and tourists alike for its dramatic scenery and well-organised and inexpensive facilities. Indeed, Mulanje is the main focal point of the Mountain Club of Malawi (MCM), which was founded as the Mlanje Mountain Club in 1952 and adopted its present name in 1980. There are innumerable hiking routes from the base to the plateau, the most popular being the Skyline Path to the Chambe Basin and the Lichenya Path to the Lichenya Plateau, both of which start at Likhubula Forestry Station some 8km from Mulanje Town. On the plateau itself there are ten mountain huts, one owned by the CCAP, and the remainder maintained by the MMCT and MCM in collaboration with the Forestry Department. These huts are connected to each other by trails ranging from 3 to 6 hours’ walking duration, and the peaks and valleys of Mulanje offer enough walking and climbing possibilities to keep anybody busy for at least a month. In addition, many of the streams on Mulanje are stocked with trout, and fishing permits are issued by the forestry office at Likhubula.