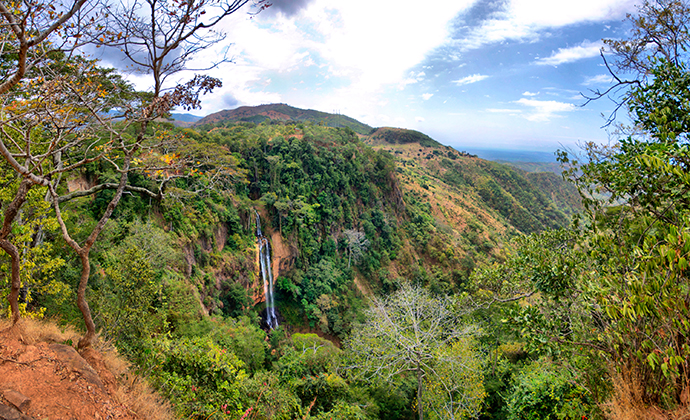 The 125m-high Manchewe Falls is a highlight of Livingstonia © tr3gin, Shutterstock

The overall impression is as if somebody started transporting a small Victorian village to the edge of the Rift Valley Escarpment, but got bored before they finished the job.

Perched on the Rift Valley Escarpment above Lake Malawi, the town of Livingstonia, founded by Scottish missionaries in the late 19th century, is one of the most scenic places in all of central Africa. The vertiginous views from the edge of this historic town – plummeting down the escarpment and across the lake to the Livingstone Mountains in Tanzania – are quite breathtaking. Indeed, on a clear day, and with sufficient imagination, the horizon is so distant that you’ll swear you can see the curvature of the Earth.

Arguably the most intriguing settlement anywhere in Malawi, and certainly the most unusual, Livingstonia is a curiously unfocused place. Dotted along the escarpment, there is a resthouse, school, technical college and hospital, all dating to the turn of the 20th century. Elsewhere, separated by scattered patches of plantation forest and indigenous woodland, is a low-key market enclosed by a few poorly stocked grocery shops, the vast mission church, and a cache of venerable administrative buildings and a clock tower overlooking a bizarrely redundant stone traffic circle surrounded by blooming flower beds. The overall impression is as if somebody started transporting a small Victorian village to the edge of the Rift Valley Escarpment, but got bored before they finished the job.

The combined scenic and historical interest of Livingstonia makes it one of the most popular non-lakeside tourist destinations anywhere in Malawi. True, it’s not that easy to reach on public transport, but for many the uphill hike from Chitimba is an attraction in itself. And once you’ve ascended the escarpment, there’s the choice of several very different but equally likeable places to stay, while amusements include a tour of the village and its museum, the walk to the spectacular Manchewe Falls, and the wide range of hikes that are possible around the escarpment.