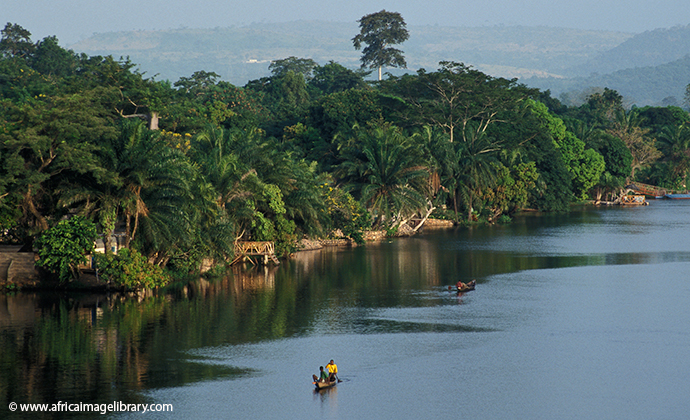 For keen hikers and ramblers, the lush and relatively cool highlands around Ho and Hohoe are studded with the country’s highest peaks, as well as a plethora of accessible waterfalls.

The east of Ghana, though less geared towards upmarket tourism than the west coast, is a haven for independent travellers, rich in natural beauty and offering a wealth of low-key, low-cost travel possibilities to those with the initiative to take them up. For keen hikers and ramblers, the lush and relatively cool highlands around Ho and Hohoe are studded with the country’s highest peaks, as well as a plethora of accessible waterfalls and an excellent little monkey sanctuary at the village of Tafi Atome. The east coast, too, is rich in isolated, out-of-the-way gems, most notably the small ports of Ada and Keta, while the area immediately inland of Accra is notable, among other things, for the tranquil Aburi Botanical Garden and impressive Akosombo Dam on the Volta River.

Travel conditions in eastern Ghana generally conform to those experienced in other parts of the country; a little cheaper perhaps, but no more arduous. Nevertheless, this region will appeal greatly to those travellers for whom travel means ‘travel’ in the chest-thumping, epic journey sense, rather than, say, soaking up the tropical beach atmosphere at Ada. Two exceptional ferry rides run through this part of Ghana: the twice-weekly trip from Ada north to Akuse along the Volta River, and the legendary overnight run from Akosombo to Yeji via Lake Volta. And there is also the bumpy overland trip from Hohoe through to the northern capital of Tamale, the closest thing in Ghana to those interminable bone-crunching trips for which many other African countries are renowned. A less obvious attraction of the east, but one that strikes us sharply whenever we revisit, is the almost total absence of hassle, particularly when compared with, for instance, the coast west of Accra – this truly is one part of Ghana where the country’s reputation as the friendliest in Africa seems fully justified.