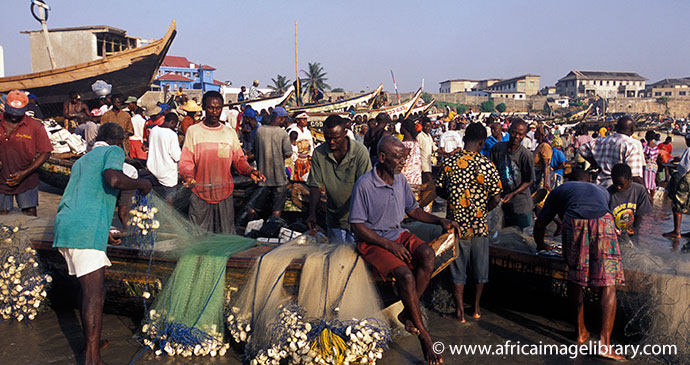 The oldest and most characterful part of Accra, Jamestown is a riot of colour © Ariadne Van Zandbergen

The old Ga quarters of Jamestown and Usshertown do possess a certain faded charm, while the more vibrant and modern districts of Adabraka and Osu are serviced by an alluringly cosmopolitan selection of bars, restaurants and other social venues.

It is tempting to introduce Accra as Ghana’s historical capital, or something similarly portentous. This, after all, is a city whose oldest Ga inhabitants settled there 500 years ago, whose coastline is guarded by a trio of 17th-century European-built forts, and which became a colonial capital back in 1877, when many other African metropolises – for instance Nairobi, Johannesburg and Addis Ababa – were still tracts of empty bush. Knowing this, Accra is perhaps something of a disappointment. Historic landmarks are sparse on the ground, and for the most part either closed to the public or surprisingly underwhelming – one notable exception is the colonial-era Jamestown Lighthouse, which offers an informal welcome to the curious visitor, and a superb gull’s-eye view over the old town.

In feel, Accra is a modern city. Emphatically so. Since the dawn of the colonial era, its population has grown from a few thousand to several million, so that it now ranks 11th on the list of Africa’s largest metropolitan areas. And while bespoke tourist attractions are few and far between, the old Ga quarters of Jamestown and Usshertown do possess a certain faded charm, while the more vibrant and modern districts of Adabraka and Osu are serviced by an alluringly cosmopolitan selection of bars, restaurants and other social venues.

Not the least of Accra’s assets is its amiability. Hectic it may be, chaotic in places, but few ‘developing world’ cities of comparable size feel as comparably safe and relaxed. As such, the Ghanaian capital tends to reward casual exploration. Scruffy lanes lined with open sewers and colonial-era homesteads might lead to grandiose independence monuments, to dazzling modern skyscrapers, to unkempt open spaces, or to rundown concrete blocks harking from the headiest days of Soviet town planning.

Indeed, the more you try to pin any one adjective to this sprawling city of incongruities, the more you’re likely to find yourself floundering. Famed Polish journalist Ryszard Kapuściński described Accra’s seeming incoherence as ‘like an overgrown small town that has reproduced itself many times over’, and indeed the city often feels more like an amalgamation of historically distinct villages – not unlike the sprawling neighbourhoods of Berlin, for example – than it does a city unto itself. And it is in this respect – the way in which the former Danish outpost of Osu, say, still feels like a separate entity to Usshertown or Jamestown – that Accra is, if not a historical city, then certainly one whose multiple personalities reflect its organic growth over centuries of habitation.