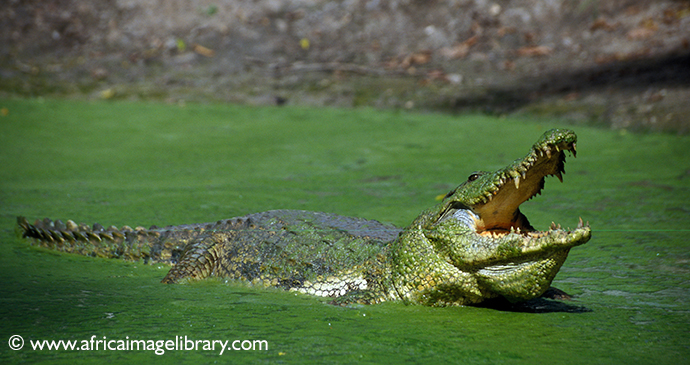 On a good day you might see more than half-a-dozen crocodiles at the pool © Ariadne Van Zandbergen, Africa Image Library

This sacred croc-infested pool in Bakau is a staple stop on day tours of the coast.

The most popular tourist attraction in Bakau is an ancient freshwater pool situated in the heart of the labyrinthine residential suburb of Kachikally (sometimes spelt Kachikali) about 700m south of Atlantic Boulevard. The pool is under the custody of a chiefly clan called Bojang, whose ancestors reputedly settled in the area around 500 years ago. According to oral tradition, shortly after the Bojang arrived in the area, they were visited by the fertility spirit Kachikally in the form of an apparently distraught elderly woman who pretended that her daughter was drowning in the pool. The family did everything they could to assist Kachikally, who rewarded them by entrusting the pool into their care and asking them to populate it with wildlife. A few weeks later, the family captured and released into the pool a pair of crocodiles which are ancestral to the 80 or so individuals that inhabit it today, and act as intermediaries with the spirit Kachikally. During the rainy season, many of the pool’s residents disperse into the surrounding town and countryside, and you hear occasional tales of people waking up to find a young crocodile next to their bed!

Although it is a bit of a tourist trap, the pool is still a popular pilgrimage site for barren women, who come from far and wide to douse themselves in its curative water (any child born after a ritual bathing of this sort is invariably named Kachikally). On a good day you might see more than half-a-dozen crocodiles sunning on the bank, including several 2m-long individuals that are totally habituated to human visitors and even allow themselves to be touched on the back or tail. The largest of these reptilian giants, a 70-year-old 3m-long male named Charlie (reputedly after the first tourist who had the nerve to touch him), seldom makes an appearance these days, though the guides insist he still lives there. The pool itself is often covered in water cabbage, a floating plant that provides shelter for numerous groove-crowned bullfrogs, which form the staple diet of the crocodiles. Be careful close to the water’s edge, as crocodiles that seem docile on terra firma might well attack somebody who falls into their watery home.

At the entrance to Kachikally, an informative little museum includes some interesting displays about the history of Bakau and Gambian involvement in World War II. The museum also displays a good collection of African musical instruments, including the harp-like kora, a 1.5m-long wooden xylophone, and several tall ceremonial drums, plus a selection of traditional masquerade costumes and masks. The leafy pool grounds also host a surprisingly varied birdlife, with the likes of blue-breasted kingfisher, black-headed paradise flycatcher and yellow-throated leaflove likely to be seen flitting about.