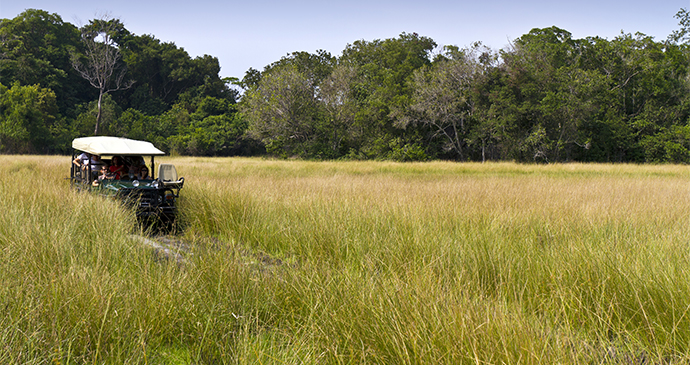 One of Gabon’s most accessible parks, Pongara National Park is astonishingly beautiful. Extending for 870km2 over much of the Pointe Denis peninsula and the riverine landscapes of the southern Gabon Estuary, it was granted protected status because of its diverse scenery – vast mangrove flats, forest, savannah, and of course the beach itself. It harbours a rich and varied birdlife, including the vulnerable Damara terns. The beach at Pointe Pongara, where the estuary meets the ocean, is famous for the large number of vulnerable leatherback turtles that crawl ashore to lay their eggs. As in Akanda, Pongara’s mangroves are full of shrimp and young saltwater fish. Its forests have remnant populations of monkey, buffalo, duiker and even a few chimpanzee and elephant.

From November to February, the local environmental organisation Aventures Sans Frontières (ASF) monitors Pongara’s beaches to protect the turtles’ eggs and reduce human-generated threats. ASF tags and tracks the turtles, conducting research and running a turtle hatchery, which plays a big role in their local education programmes. The leatherback turtle features in traditional Gabonese stories where, thanks to its cunning, the turtle gets the better of leopards, snakes and crocodiles.

Most visits to Pongara National Park (entry 10,000/5,000CFA tourist/foreign resident) take in only the peninsula portion that surrounds Pointe Denis, as there is currently no tourist development in the riverine southern part of the park.

Aventures Sans Frontières organises wonderful excursions to the peninsula. As turtles tend to lay their eggs at night, the company offers to pitch a tent for you right on the beach. You can spend the day walking along the coast on the lookout for turtle traces, or join a guided forest tour. All excursions start at ASF’s Pongara Eco-museum (located near Pointe Pongara), which provides information about turtle biology, threats and conservation issues, and displays several shells and turtle models, giving you an idea of these creatures’ grand scale. The trip is excellent value for money and not expensive: count on 10,000–50,000CFA for the guide(s) and 10,000CFA for a tent. ASF can arrange a boat from Michel Marine (10,000CFA round trip). It’s equally possible, or perhaps even preferable, to join a turtle tour with ASF while staying at any of the hotels in Pointe Denis. Pongara Lodge and La Baie des Tortues Luth both run their own excursions for guests, too.

Walking down the endless beach, you pass the idyllic resort La Baie des Tortues Luth, a perfect place for a break. From here, a short hike in the forest takes you to the place where chief Rapontchombo, alias King Denis, was buried for the first time. Rising sea levels forced the villagers to dig the body up and rebury the king somewhere deeper in the forest. If you want to visit his current grave, you should ask the village’s chief – who is one of Rapontchombo’s direct descendants – for permission and directions.

Continuing south brings you to Pointe de Ngombé and its lighthouse, which dates to the end of the 19th century. There used to be a nice restaurant here, but it closed its doors in 2012 after the death of its proprietor, Monsieur Moustache, and has since fallen into disrepair. It may be possible to climb to the top of the lighthouse for spectacular views of the ocean, but do use your judgement. From June to September, it’s possible to spot passing humpback whales from up here.