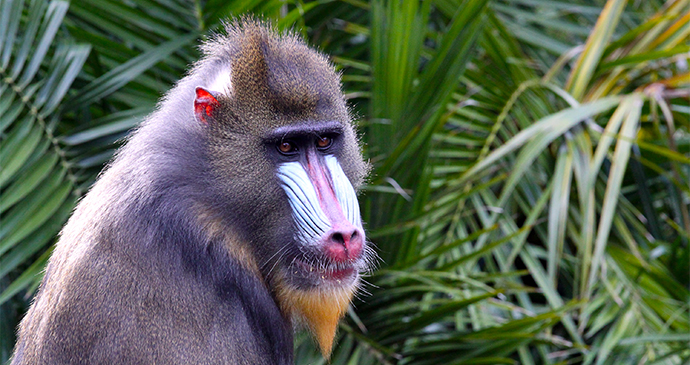 Visitors can track mandrill in Parc National de la Lopé, where they live in troops of over 1,000 © Cloudia Spinner, Shutterstock

Lopé National Park is a vast expanse totalling 485,000ha. Bordered by the majestic Ogooué to the north, the Offoué to the east, the du Chaillu Mountains in the south and the Mingoué River to the west, more than 1,500 plant species have been recorded here, of which 40 represent new species for Gabon. Lopé is also home to 412 of the 700 species of birds recorded in the country, including seven kinds of hornbill, three forest kingfishers and the vulnerable grey-necked picathartes. The largest known wild primate gathering – 1,350 mandrills in one great foraging group – was recorded here in 1996. Mandrills are particularly visible in the dry season (Jul–Aug), when they hang around in the north of the reserve for up to two weeks at a time. No-one knows why they gather in such large groups.

Besides mandrill, there are large gorilla and chimpanzee populations. The Station d’Études des Gorilles et Chimpanzés (Centre for Gorilla and Chimpanzee Studies; SEGC), co-managed by CIRMF and CWS, has made Lopé well known in the scientific field.

The first thing to strike you as you arrive at Lopé is the dramatic patchwork landscape of open savannah and dense rainforest. The explanation for this landscape lies in the last ice cap in northern Europe, 18,000 years ago, when the cooler, drier climate caused great stretches of tropical rainforest to disappear. When the Ice Age ended about 12,000 years ago, the forest recolonised the open savannah. The forest that you find in Lopé, therefore, is relatively young compared with some of Gabon’s truly ancient forests. There are still areas of savannah along the northern and eastern borders of the reserve, which have survived because here the average annual rainfall is just 1,500mm – insufficient for the forest to take root. The Lopé region has one of the driest climates in Gabon and therefore the most fragile rainforest.

Another reason for the survival of Lopé’s savannah areas is down to humans. Archaeological findings including early Stone-Age pebble tools, Stone-Age arrowheads and Iron Age petroglyphs indicate that people have been present in the Ogooué Valley for 400,000 years. Lopé is one of the oldest archaeological sites in Africa and remains of numerous prehistoric villages are still visible on savannah hilltops. It is likely that fire was a key tool for these early inhabitants to control their environment and that by regularly burning the savannah areas, the encroachment of the forest was stalled. Burning is still used each dry season by the Ministère des Eaux et Forêts to ensure that the limits between forest and savannah are maintained.

It’s thanks to its unique archaeological and natural landscape that Lopé and its surrounding areas – the Écosystème et paysage culturel relique de Lopé-Okanda (Ecosystem and Relict Cultural Landscape of Lopé-Okanda – was recognised as a UNESCO World Heritage Site in 2007.