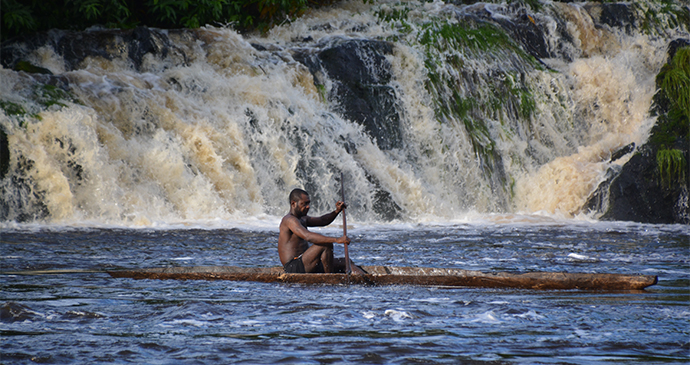 The spectacular Chutes de Koungou have a drop of over 60m, making them the highest falls in equatorial Africa © Stuart Jarvis

Take a pirogue through the forest to the spectacular Chutes de Koungou in Parc National d’Ivindo.

Traversed in the north by the black waters of the Ivindo River – the Ogooué’s largest tributary – and by the little-explored Djidji (Dilo) and Langoué rivers to the south, the 300,000ha of Ivindo National Park are among Gabon’s wildest and most spectacular. Southwest of Makokou, the Ivindo’s strikingly dark, tannic waters widen and break up into a labyrinth of channels and rapids flowing around hundreds of rocky islets, culminating in the phenomenal display of the Chutes de Koungou (Koungou Falls): a complex of waterfalls nearly 2km wide, broken up into four levels and three separate sets of cascades. These impressive falls, with a drop of over 50m, are the highest in equatorial Africa and of great spiritual value to local people. Intensely vegetated islands dot the river here, with some as small as individual trees that seem to grow directly out of the falls.

Several years ago, Koungou Falls were threatened by the proposed construction of a hydroelectric dam to supply power for iron ore mining at Bélinga, some 100km upstream. Had it been fully constructed, the dam would have flooded large areas of forest, risking the displacement of local communities and opening up the park to increased poaching and illegal logging. A successful pressure campaign saw the project shelved in 2009.

A pirogue trip (arranged with FIGET) through the forest to the Koungou Falls provides an exhilarating introduction to the wilderness, with plenty of opportunities to glimpse birds, monkeys and hippos. More than 430 species of bird, including large concentrations of African grey parrots, are recorded as living in the Ivindo Basin, making it one of the most rewarding bird-spotting regions in Africa. Indeed, more than 350 species have been recorded in the area immediately surrounding the IRET research station alone. Underwater, the Ivindo’s ichthyological fauna changes significantly above and below the falls, as most fish are unable to cross the natural barrier formed by the rapids.

Further downstream, near the park’s western border, the wide and dramatic Chutes de Migouli (Migouli Falls) see the Ivindo drop 43m and the powerful Chutes de Djidji (Dilo) (Djidji (Dilo) Falls) crash for 60m; both waterfalls are difficult to access and see precious few visitors – contact FIGET if you’d like to be one of them.

The park includes the 10,000ha Ipassa Reserve, one of Africa’s first protected areas, located directly southwest of Makokou and recognised as an Important Bird Area since 2001. Incredibly, logging has never been allowed in the Ipassa Reserve (though hunting remains an issue). The Institute for Research in Tropical Ecology (IRET) has been here since the early 1970s, and at its peak there were 100 researchers. Research still continues today, but on a much smaller scale.

Around 50km south of the Koungou Falls (as the crow flies) is Langoué Baï, a place of unparalleled beauty. The baï, which is the Pygmy word for forest clearing, is approximately 1km by 300m wide. It was brought to public attention in 2000 by biologist Mike Fay during his epic Megatransect and now houses the Langoué Baï camp, established by the Wildlife Conservation Society, which monitors wildlife in the park. Langoué Baï’s mineral waters lure animals, above all elephants, out from under the cover of the forest to feed on the nourishing saline soil. The elephants keep the baï clear and maintained by digging in its mineral-rich soils, creating a magnet for gorilla and other mammals, including sitatunga, red river hog, buffalo, monkey and mangabey. Along with the habituated population in Loango, the baï is the most reliable place in Gabon to see gorilla, and chances are highest in the dry season (Dec–Jan & May–Jul). There is now an observation tower overlooking the baï, where visitors have commanding views over the surroundings; it’s possible to contact FIGET and arrange to spend the night here.

Outside of the park, FIGET also arranges trips to the little-known Momba Baï, lost deep in the forests some 25km to the west of the Makokou– Okondja (R15) road. See here for details on how to visit.