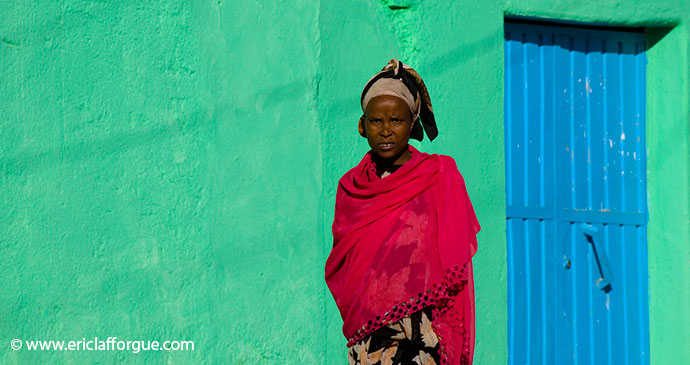 Harar is known for its colourful houses © Eric Lafforgue

Harar is the sort of easy-going, cosmopolitan town where you could settle in for a week and do nothing more exerting than just soak up the atmosphere.

The spiritual heart of Ethiopia’s Islamic community, the walled citadel of Harar is considered by some to be the fourth-holiest Islamic city after Mecca, Medina and Jerusalem. It is also an exceptionally pleasant city to visit: lively, welcoming and relaxed, yet possessing a cultural integrity and aura of lived-in antiquity that make it the most traditionalist of Ethiopia’s larger towns. Boasting a moderate highland climate, Harar lies at the centre of a fertile agricultural area, one renowned for its high-quality coffee and khat. But its focal point is Harar Jugol, the 48ha walled city, a UNESCO World Heritage Site whose innumerable winding alleys lead past 83 private and public mosques (the world’s largest such concentration) and the 102 qubi (shrines or tombs of important holy men) alluded to in the nickname Gey Ada (City of Saints).

Considering the prominent role played by Harar in past Muslim–Christian–Oromo conflicts, the modern town possesses a refreshing mood of religious and cultural tolerance. Indeed, while Harar Jugol is deeply Islamic in character, the newer part of town, which runs west along the main road to Addis Ababa, is predominantly Orthodox Christian, and the frizzy-headed traditionalist Oromo are also much in evidence, particularly in the market areas. What’s more, for a city of such devout pedigree, Harar has an undercurrent that is more than a little – dare I say it – hedonistic. The compulsive chewing of khat dominates every aspect of public life and, to paraphrase the sentiments of one Muslim resident, you really do need something liquid to chill you out after a good chew. Any preconceptions about fundamentalist Harar can be washed down at the bars which, I suspect, come close to matching public mosques one for one within the old city walls. All in all, Harar is the sort of easy-going, cosmopolitan town where you could settle in for a week and do nothing more exerting than just soak up the atmosphere.