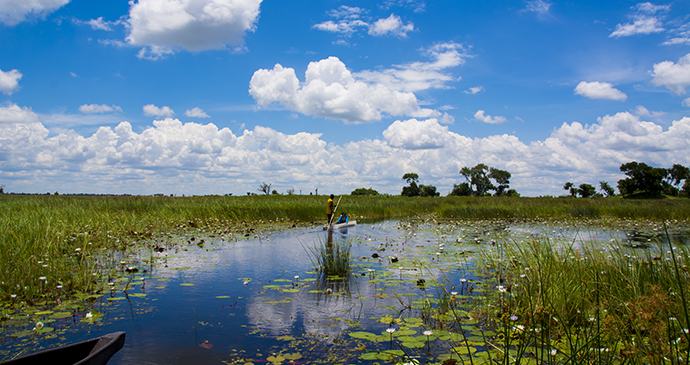 Glide along the waterways of the Okavango Delta in a mokoro © Hiromi Ito Ame, Shutterstock

Come face to face with a range of wildlife at the extraordinarily beautiful islands and waters of the Okavango Delta.

In his book, Lake Ngami and the River Okavango, the Victorian-era explorer and trader Charles John Andersson wrote:

On every side as far as the eye could see, lay stretched a sea of fresh water, in many places concealed from sight by a covering of reeds and rushes of every shade and hue; whilst numerous islands, spread over its whole surface, and adorned with rich vegetation, gave to the whole an indescribably beautiful appearance.

For modern visitors the Okavango Delta has lost none of its beauty. However, finding reliable information on the various areas from brochures can be as challenging as Andersson’s expedition.

When and how to visit

The best times to visit are dependent upon how you intend to visit, exactly which camps you are visiting, and why.

If you’re flying into a camp in Moremi or the Delta then the season won’t make much difference to the access. The Okavango’s camps used to close down during January and February, but now most keep open throughout the year, despite being much quieter during the green season (December to March).

In terms of vehicle access to the various game-viewing areas from your camp, the rains are often less of a concern than the flood, the peak of which usually lags behind the rains by several months (depending on how far up the Delta you are). However, generally there will be the most dry land from about August to January.

If you’re driving yourself into Moremi, it’s important to understand that only a restricted area of the reserve will be accessible to you, and the wet season will make this access even more difficult. As the rains continue, their cumulative effect is to make many of the roads on the Mopane Tongue much more difficult to pass, while it simply submerges others. Thus only the experienced and well equipped need even think about driving anywhere through Moremi between about January and April.

Most visitors who drive themselves come to Moremi in the dry season, between around May and October. Then the tracks become increasingly less difficult to navigate, although even then there are always watercourses to cross. As with all national parks, the speed limit in the park is 40km/h, with no vehicles allowed on the roads between sunset and sunrise. 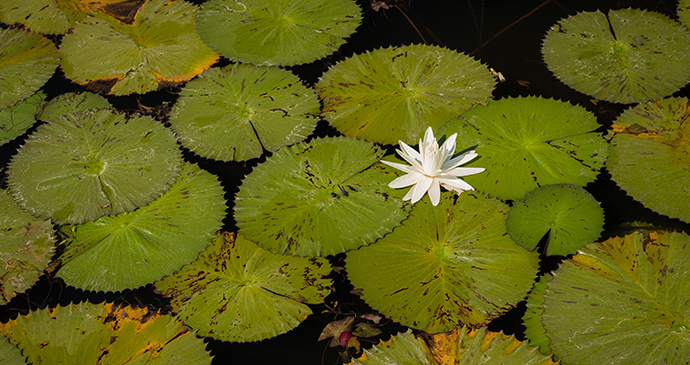 Visit during the rainy season to witness the most incredible flora © Janelle Lugge, Shutterstock

The flora and the birdlife are definitely more spectacular during the rains. Then the vegetation goes wild, migrant birds arrive, and many of the residents appear in their full breeding plumage. So this is a great time for birders and those interested in the plants and flowers.

The flora and the birdlife are definitely more spectacular during the rains. Then the vegetation goes wild, migrant birds arrive, and many of the residents appear in their full breeding plumage.

The story with the animals is more complex. In most of Moremi there is water throughout the year. Higher water levels here simply means less land area available for animals that aren’t amphibious. However, around the edges of the Delta, animal densities are hugely affected by the migration towards the water from the dry central areas of the country.

Thus game viewing generally gets better the later in the dry season that you go … although this trend is probably less pronounced in the centre of the Delta than it is at the edges.