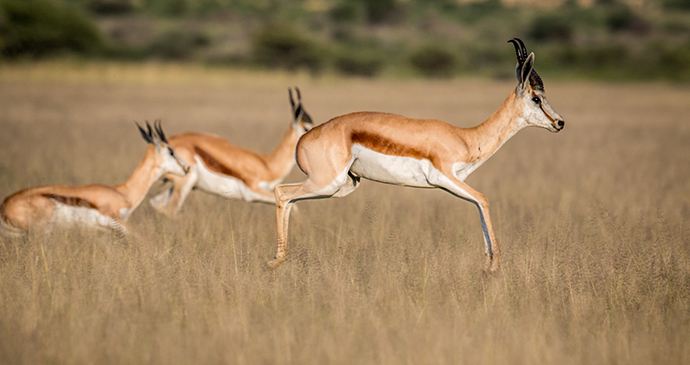 Springbok are probably the most numerous of the large herbivores in the park today © Simon Eeman, Shutterstock

This is Africa at its most remote and esoteric: a vast sandsheet punctuated by a few huge open plains, occasional salt pans and the fossil remains of ancient riverbeds.

Covering about 52,800km², the Central Kalahari Game Reserve (or the CKGR, as it’s usually known) is one of the world’s largest game reserves. It dominates the centre of Botswana, the wider region that referred to here as simply the ‘Central Kalahari’. This is Africa at its most remote and esoteric: a vast sandsheet punctuated by a few huge open plains, occasional salt pans and the fossil remains of ancient riverbeds.

The CKGR isn’t for everybody. The game is often sparse and can seem limited, with only occasional elephants and no buffalo; the distances are huge, along bush tracks of variable quality; and until 2009, the facilities were limited to a handful of campsites. So without a fully equipped vehicle (preferably two) and lots of bush experience, it was probably not the place for you. The converse is that if you’ve already experienced enough of Africa to love the feeling of space and the sheer freedom of real wilderness areas, then this reserve is completely magical; it’s the ultimate wilderness destination.

In a change of policy, the authorities have permitted the establishment of two small lodges within the reserve, thus opening it up to those who don’t have the experience, the time or the equipment to come here alone. As a middle ground, there are also a number of mobile safaris operating in the area.