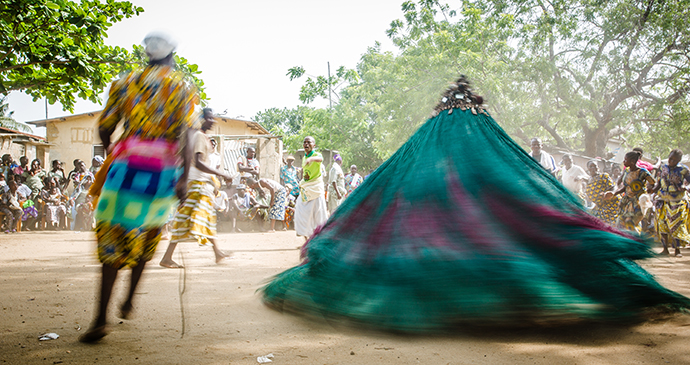 Once upon a time there lived a great king called Kpassé. He was a wise and gentle king who ruled over a rich, peace-loving kingdom and, though he was admired by his subjects, he lived in constant fear of the king of the neighbouring land. This king was a wicked and nasty man who lived in a city with walls made of human blood and whose favourite hobby was the torture of prisoners in the most grotesque of manners. One day this wicked king invaded King Kpassé’s country and, in great fear, Kpassé fled into a dense and dark forest to hide from his pursuers, but the wicked king knew exactly where he had gone and chased after him. Fortunately, Kpassé was a quick-witted king and when he reached the middle of the forest he used his magical powers to turn himself into a huge tree and in that way he was able to escape from the nasty king – whose kingdom was Dahomey.

Dahomey, a name whispered only in fearful awe by the citizens of the surrounding kingdoms, had enough chill to send a shiver down the spine of anyone who crossed its path. Its kings, descended from the son of a princess who slept with a leopard, were protected by the only genuine Amazon army the world has ever known and they lived a life of extreme brutality. The walls of their capital were festooned with the severed heads of enemies and former friends of whom they had grown tired. To relax they feasted on a harem of hundreds of virgin girls and for sport they fulfilled their coronation vow, which was to expand by war the size of the kingdom they had inherited. To fund it all, the many prisoners that this near-constant state of warfare generated were wrapped in chains and sold to the European slavers along the coast. But the real ace of terror up their sleeves was not the fear of a life of slavery. It was something far worse. It was a word full of black magic, a word that still makes us shudder. For Dahomey, or Benin as it’s called today, is the original home of Voodoo.

Hidden away in the green folds of Africa, Benin is a small country that few westerners have thought to make a holiday destination, but we guarantee you that once visited it will forever leave you enchanted. Safe, stable, easy to get around and immensely welcoming, this is West Africa at its most enjoyable. Within its diminutive borders it manages to pack an extraordinary range of attractions including lions and elephants striding through the best national parks in West Africa, striking modern art galleries in the cities, faded pastel-coloured colonial architecture, palm-fringed beaches, a rich historical legacy and, of course, a bubbling cauldron of spirits, kings and witches.

My own first encounters with the magic came as I was shopping for fruit in a Cotonou market. A quick turn down a side alley led me from colourful pyramids of tomatoes and bananas to the stench of death and Voodoo: a basket of shrivelled songbirds and the vacant eye sockets of a table full of monkey skulls. From this moment on I found myself spiralling through a world that became ever more strange; I ran from a spirit with horns sprouting from his back whose single touch would result in certain death, and I took shelter in a room where sacred pythons slithered from roof beams. I sat in the shade as a witch battled her personal demons, I found myself surrounded by spinning haystacks, and watched, fascinated, as a man with a magic touch healed a lady’s broken leg through nothing but massage. I surprised myself by kissing the ground at the foot of a Voodoo priestess and shyly asked a beautiful princess if I could sit beside her, and I waited hours for a royal audience with a king who could become a bird and fly away above the clouds.

Shortly after I returned to my comfortable, safe and scientific Western world, where magic is something that appears only in fairytales, I happened across a Beninese man and I told him of my experiences in his country. He smiled in the way we all smile to an uncomprehending child and he said: ‘But you know that everything that you saw was very real and that you can now never again doubt magic.’ And he was right, because now, after falling under the spell of Benin, I know that I can never again doubt the unknown. I believe it all. I believe in ghosts and magic and the fairytales of the kings of Africa who turn into trees. And, as in all good fairytales, I believe that you too will now take this book of magic and, just like me, live happily ever after under the spell of Benin.