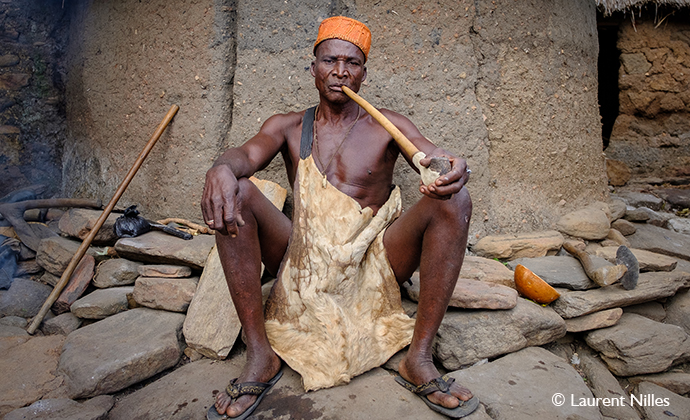 It’s hard to believe that anyone can actually fit inside the houses in Tanéka Koko. It’s as if the entire village has shrunk in the wash.

There are a number of villages scattered over the rocky and scrubby landscape around Djougou, but only one, Tanéka Koko, welcomes visitors. With mud-and-wattle houses and thatched roofs spirited away under the shade of big trees, the village appears from a distance to be just like any other in Africa. However, once inside you will realise that all of the buildings are actually far smaller than you originally thought – it’s hard to believe that anyone can actually fit inside the houses. It’s as if the entire village has shrunk in the wash. Though their houses and villages might be very different from those of the more famous Somba to the north, the two groups retain a lot of cultural similarities as well as much of their traditional tribal lifestyle. However, today the modern world has started to catch up with the Tanéka villages and people and while the headman and the healers (of which there are several, each of whom specialises in a different illness) might spend their days sitting around the village smoking long bone pipes, wearing animal fur clothes (and, one gets the impression, waiting for passing tourists …), most of the remaining population wear T-shirts and trousers and live in larger, brick- and tin-roofed houses, located just down the hill from the original village.Many of the local young people also leave the Tanéka villages as soon as they can in search of brighter financial prospects in the big cities. Even so, the most important people in the community remain the headman and the healers and some old customs are still very much alive. On one of the days we visited we witnessed a male circumcision ceremony and other ceremonies and festivals are fairly common. These are often linked to important coming-of-age dates and harvests.