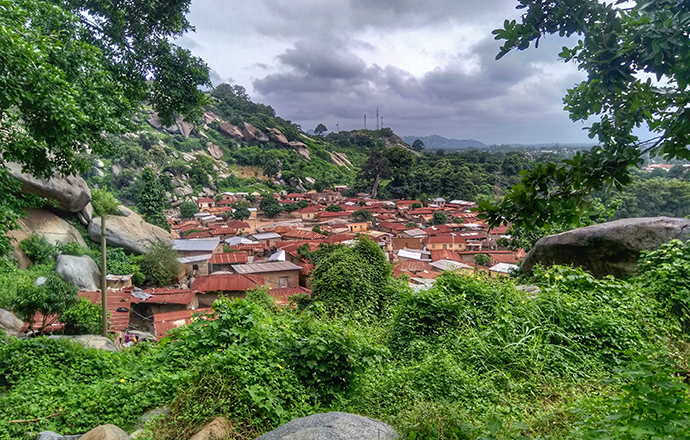 Search for baboons and Voodoo shrines in the granite hills around Dassa-Zoumé © Emmanuel Darboux, Shutterstock

The best thing about Dassa is the atmosphere; you start to feel the tempo downgrading from the often-hectic coastal lands into something altogether more relaxing.

North of Bohicon the countryside loses much of its sheen of green and becomes noticeably drier with acacias and baobabs starting to replace the palms and bananas, and the population density thins dramatically. Of the few towns of note between Abomey and Parakou, Dassa-Zoumé, the town of 41 hills and normally known just as Dassa, is the largest and best organised for tourists. In fact, each August it becomes the biggest tourist centre in Benin as thousands of Catholic pilgrims descend on the grotto just outside of town where the Virgin Mary is said to have once appeared. In addition to Christian spirits there are plenty of Voodoo spirits in the hills and, for tourists, there is walking or, a little further afield, wildlife spotting in the form of hippos. The best thing about Dassa, though, is the atmosphere; you start to feel the tempo downgrading from the often-hectic coastal lands into something altogether more relaxing.

The town’s main attraction is the enormous basilica, a 10-minute walk south from the centre on the road to Bohicon. Built next to the grotto where, in 1954, a statue of the Virgin Mary is said to have miraculously appeared, the basilica was first opened in 2002 and, from behind, its architectural style appears to be loosely based around that of a multi-storey car park. Things don’t improve much inside. The great hall seems to contain as much religious feeling as a supermarket on a Saturday afternoon, but you’d be hard pushed to find a supermarket with such a memorable wall frieze – a giant crucifix bursting magnificently out of the clouds. The grotto, where the statue of the Virgin Mary appeared, is just beyond the basilica and is a little less tacky, though only marginally. Behind the grotto a trail winds up into the hills past the 14 Stations of the Cross, each marked by a small statue. The pious are supposed to complete this by crawling on their hands and knees over the sharp granite rocks; today, though, most people are too busy taking selfies to do this. Services take place in the basilica every Sunday with the last one of the month being the busiest. During Christian religious holidays the basilica and grounds fill up with tens of thousands of pilgrims. The busiest time of all is during the three-day pilgrimage that culminates on 15 August. The faithful come from across West Africa and even Europe to attend. In 2002, Pope John-Paul II led Mass here during the pilgrimage.