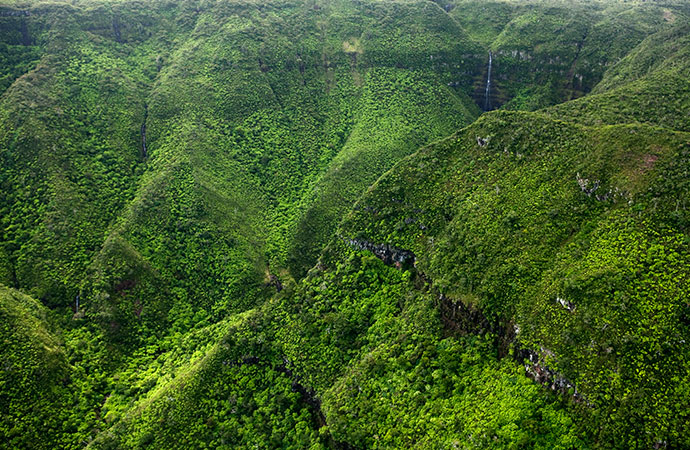 Most people have heard of the world’s most famous extinct creature but few are aware that it was endemic to Mauritius. The dodo (Raphus cucullatus) is believed to have been a flightless relative of the pigeon and a close relative of the Rodrigues solitaire (Pezophaps solitaria), which is also extinct. It would seem that the dodo lost its ability to fly due to the abundance of food close to the ground and the absence of mammalian predators. With the arrival of Europeans in the late 16th century, the dodos’ numbers started to decline and it is believed they were extinct by 1681. Dodos laid their eggs on the ground, making them easy targets for introduced predators, such as rats and pigs. The destruction of their habitat and these new predators were the principal causes of their demise, although the early settlers certainly ate their way through a good number of the hapless birds. Heyndrick Dircksz Jolinck led a Dutch exploration of Mauritius around 1598 and wrote:

We also found large birds, with wings as large as of a pigeon, so that they could not fly and were named penguins by the Portuguese. These particular birds have a stomach so large that it could provide two men with a tasty meal and was actually the most delicious part of the bird.

The early settlers sketched the rather peculiar-looking birds but no physical evidence of their existence was found until the 19th century, leaving many to conclude in the interim that it was a mythical creature. This led to a fascination among the scientific community with finding dodo remains. In 1865, after 30 years of searching, George Clark, an English primary schoolteacher working in Mahebourg, found an assortment of dodo bones in marshy land known as Mare aux Songes, in the southeast of the island. At the time, indentured labourers were digging a railway line from Curepipe to Mahebourg and piling up the many assorted bones that they found. A young British civil engineer, Harry Higginson, took some of the bones to George Clark, who confirmed they were those of the dodo. Clark returned to the site to supervise further excavations; he sent hundreds of bones to the British Museum, for which he was paid a pound a piece, and those bones ended up in museums around the world.

In 1904, Louis Etienne Thirioux, a Port Louis hairdresser and amateur naturalist, found a complete dodo skeleton, which at the time was the only one in the world. The skeleton is now in the Natural History Museum in Port Louis.

In 2005, an international team of researchers excavated part of the Mare aux Songes and found fossilised dodo remains that had accumulated over centuries. Subsequent excavations suggested that dodos, along with other animals, became mired in Mare aux Songes trying to reach water during a long period of severe drought about 4,200 years ago.

In 2007, the discovery of ‘Dodo Fred’ added further to our knowledge of these birds. Fred and Debbie Stone were looking for cave cockroaches near Bois Cheri when they discovered bones that were later confirmed to be those of a dodo. These were the first dodo remains found in the highlands and proved that dodos inhabited that area. It is thought that Dodo Fred entered the cave to seek shelter from a violent cyclone, fell down a deep hole and could not climb out. Interestingly, during the excavation of the remains, the remains of another extinct bird, the Mauritian owl, were found. This discovery provided important DNA for determining the dodo’s closest relatives. Test results showed the dodo was related to the Nicobar pigeon (Caloenas nicobarica) of the Malay Archipelago, the Solomon Islands and Palau, the tooth-billed pigeon (Didunculus strigirostris) of Samoa and the Victoria crowned pigeon (Goura victoria) of the New Guinea region.

The dodo has to be one of the world’s most famous birds and has become the reigning symbol of extinction. Its rather ridiculous appearance has contributed to its fame, and it is always depicted as a friendly and harmless creature as it was in Lewis Carroll’s Alice’s Adventures in Wonderland. In 2009, a previously unpublished 17th-century Dutch illustration of a dodo was sold at Christie’s in London for £44,450, evidence that 300 years after its demise the dodo still fascinates us.