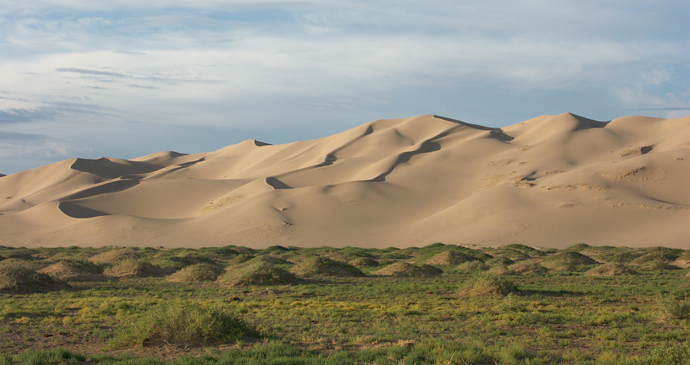 I peered down through sweat-soaked eyelids at my dark brown, sun-peeled hands. Between my left thumb and index finger squirmed a blood-sucking tick, swollen to nearly the size of a golf ball, freshly plucked from the genitals of one of my camels. In my right hand was a lump of dried camel faeces, just scooped from the ground to serve as fuel for the campfire. This was comfortably my most bizarre summer holiday to date.

I was part of a 12-strong expedition team crossing 1,600km of the Gobi on foot from May to July 2011. Using 12 Bactrian camels to carry our provisions, the journey brought us across six aimags, or provinces, from the southwest to the southeast of Mongolia. We came from ten different countries and most of us had met on the internet, making it as much a social experiment as a desert expedition.

Our spirits were lifted by the people we met on the road: dainty women on tiny horses, wind-burnt boys on rusty motorbikes and nomads moving to pastures new, greeted by open doors, milky tea and wrinkled eyes framed by honest smiles.

Even our camels were found online! Our leader viewed them via webcam, inspecting their humps, feet and teeth, and arranged to have them fattened up for months before we arrived. To support us, we had a crew of four locals, including a translator and a cook, who would meet us along the route in a rickety Russian van.

We began our trek on the colossal plains of Khovd Aimag. In the far distance to the north and the south stood row upon row of dark, jagged mountains, like the plates of huge, sleeping dinosaurs’ backs. These were the Altai Mountains, home to an abundance of wildlife. Herds of semi-wild horses galloped past us and steppe eagles soared above our heads as we walked; wolves howled in the hills as we slept. Gers appeared on the horizon from time to time, like sparsely dotted daisies on the parched, yellow-green grass.

As we dropped deep into the South Gobi, grass turned to gravel, gravel turned to sand and the mountains slowly disappeared. Little existed above knee-height, leaving the cloudless, blue sky completely unobstructed, a huge blanket above our heads. As temperatures soared to 45°C, we zigzagged thirstily from well to well, many of which were dry. Meanwhile, sandstorms and violent twisters beat our tents, battered our clothes and covered everything we ate in sand.

The toll of walking just under a marathon a day in these conditions began to show. Our numbers slowly dwindled as team members suffering from tiredness and injury were evacuated one by one. Some were even kicked by our camels. But our spirits were lifted by the people we met on the road: dainty women on tiny horses, wind-burnt boys on rusty motorbikes and nomads moving to pastures new. I learnt to ride our camels, setting off from camp after supper to nearby gers, where I was greeted by open doors, milky tea and wrinkled eyes framed by honest smiles.

When our trek finally came to an end at an ovoo outside Sainshand, two months after we had set off from Khovd Aimag, four of us had made it having walked the entire way.

We passed through a small town in the Gobi during the annual Naadam sporting festival, where we watched horse racing and wrestling, mingled with men snorting snuff and women dressed in brightly coloured deels and feasted on aaruul (dried cheese curds) and airag (fermented mare’s milk). When our trek finally came to an end at an ovoo outside Sainshand, two months after we had set off from Khovd Aimag, four of us had made it having walked the entire way.

Unkempt and unwashed, we bade farewell to each other and our camels before selling them to a local herder! I remained in Mongolia for one more month, buying a ticket on the Trans Siberian/Trans-Mongolian railway. I trundled south to the border with China, then north again through the central steppes, sharing my third-class carriage with students, families and traders. I spent some time in Ulaanbaatar before taking a van further north until I arrived at a picturesque village, where I borrowed a tiny, semi-wild horse.

I rode it further north still along the shores of Lake Khövsgöl, near the northern border with Russia. I began my journey in the sun-scorched Gobi and could not have finished it in a more different place. On horseback, I climbed to high ground and gazed across the vast, motionless, cobalt-blue lake, its surface area larger than Luxembourg, to the pea-green, alpine forests beyond. Never before had I seen such a land of extremes.

Faraz Shibli describes his Gobi crossing, which he and his team completed to raise money for Edurelief, a charity that supports the educational needs of Mongolian children (for more information, see www.edurelief.org).