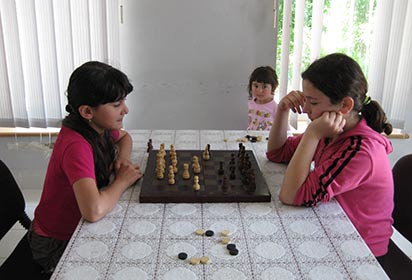 For a small country of only three million inhabitants Armenia has a remarkably high standing in the world of chess, being ranked fourth by the World Chess Federation (FIDE) behind Russia, Ukraine and China (September 2013). It has one of the highest per capita number of chess grandmasters. As of August 2013 FIDE listed 24 active (male) Armenian grandmasters, four women grandmasters, 17 international (male) masters and four women international masters.

(Photo: Local children have a game of chess © Deirdre Holding)

Chess has a long history in Armenia, being known since the 9th century and mentioned in manuscripts from the 12th and 13th centuries. It was popularised during the Soviet era and competitions started in 1927 with the founding of the Armenian Chess Federation. Its popularity increased with the successes of Tigran Petrosian who was World Champion from 1963 to 1969 and a member of the Soviet team which won the Chess Olympiad nine times between 1958 and 1974.

The Yerevan Chess House (50 Khanjian St, Yerevan; tel: 10 554 923) was opened in 1970 and since 1984 has been named after Tigran Petrosian whose statue stands in front of the building. It is home to the Armenian Chess Federation (www.chessfed.am) whose current president is Serzh Sarkisian, President of the Republic of Armenia. The Chess House publishes a weekly magazine, in Armenian, whose name translates as Chess in Armenia. The magazine’s website (www.armchess.am) has details of competitions and live coverage of games. The Federation’s website also has live coverage.

The Chess Academy of Armenia (www.chessacademy.am) was founded in 2002 under the auspices of the Armenian Chess Federation. Supported by the government, it organises chess tournaments and is the leading centre for chess training. In 2011 Armenia became the first country to make chess a mandatory part of the school curriculum for all seven to nine-year-olds, allocating funds to the Chess Academy to draw up courses, create textbooks and train instructors. Funds have also been allocated to equip chess classrooms in every school.