Bus journeys are an invitation to adventure. To celebrate the release of our new Bus-Pass Britain guide, we’ve compiled a list of some of our favourite routes from across the country, winding through city streets, remote valleys and beautiful coastal paths. What better way is there to explore what Britain has to offer than from the top deck? 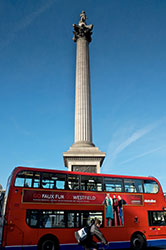 London’s number 15 bus route really is capital. It is an artery linking the West End with the contrasting East End and Docklands, along the way passing some of London’s finest buildings and vistas. Other services may have the edge when it comes to grand sights, but the 15 has a trump card that will appeal to bus travellers with a sense of transport history. The busy section of the route from Trafalgar Square to Tower Hill benefits from extra daytime buses that ply just this part of the entire journey. The vehicles that operate those supplementary services are 50-year-old Routemasters. There’s about a fortnight’s holiday’s worth of things to see and do along route 15. I use it most frequently as a ‘gallery hopper’ service that conveniently links the National Gallery (and its near neighbour the National Portrait Gallery), the Courtauld Gallery, Tate Modern and Whitechapel Gallery. 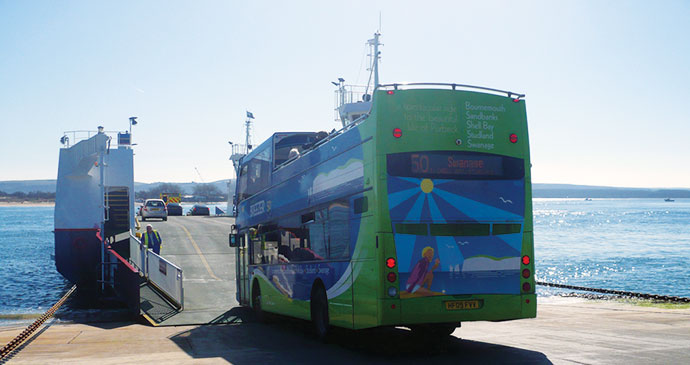 It was an inspired moment when local bus operator Wilts & Dorset decided in 2009 to swap time-worn old vehicles for brand-new open-top buses on the route to Swanage. Suddenly, folk started to ride the route for fun. Rebranded the Purbeck Breezer (for Swanage is on the Isle of Purbeck, which oddly is not an island at all) and now run by More, this is a British bus success story.  For the best seats, board the bus at Bournemouth Station where the route starts. The atmosphere on the top deck is one of excitement and holiday fun, which nicely infects even those who are merely making routine journeys to work or the local shops. 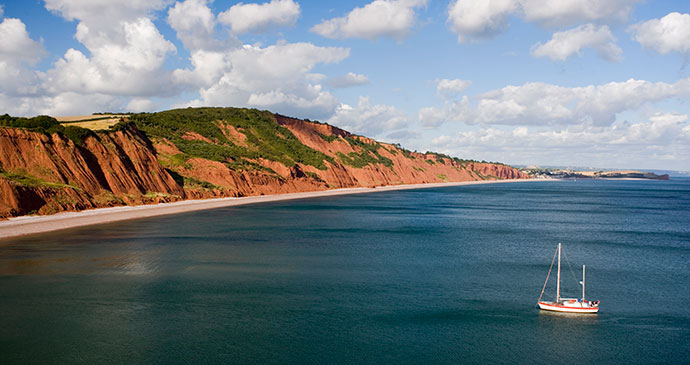 This is a bus with attitude; it squeezes cars up on to the pavement in the narrow streets of Beer, Colyton and Lyme, and persuades even pushy Land Rovers to reverse out of its way. The X53 is justifiably self-confi dent; it’s the Jurassic Coaster, a double-decker with its name and ‘One bus, millions of years of history’ branded on its sides and jungle-like, prehistoric leaves painted on the windows. You’ll want to take the favoured seat at the front of the top deck, although you might have to tussle with shoppers, walkers and sightseers. Everyone wants to sit where they can watch the Devon countryside slowly unfold; much of the route is, after all, an Area of Outstanding Natural Beauty. 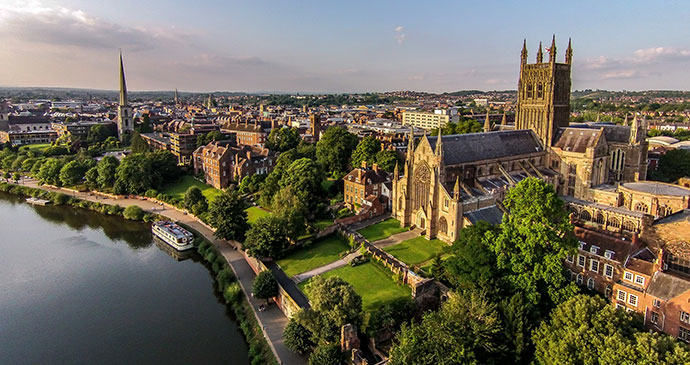 It is hard to imagine two more contrasting cities than the pair which mark the start and end of this journey. Birmingham once styled itself ‘the city of a thousand trades’. Today it is a vibrant representation of modern multi-cultural Britain. Worcester has never lost its archetypically English county qualities, with associations to the Middle Ages, the English Civil War, cricket, fine porcelain, Worcestershire Sauce and Edward Elgar. This route is thus a bridge from the metropolitan bustle of Birmingham to the more sedate pace of Worcester. Every bus on this service should be a double-decker, but the reality is that some are singles. The panoramic delights are best viewed from the top-deck front seat, so try to be among the first in the queue to board the bus. 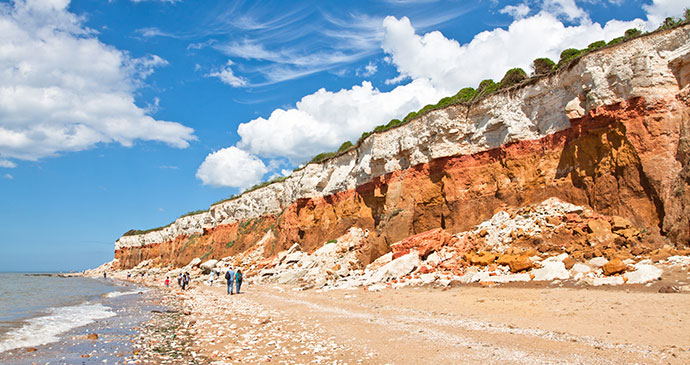 Hop off at Hunstanton on the Cromer to King’s Lynn route and take a walk along the beautiful beach © Lenazajchikova, Dreamstime

The Coasthopper service that runs between Cromer and King’s Lynn along the north Norfolk coast must be one of the most useful bus routes in the country – it’s even free if you already have a Rover ticket for the Bittern Line rail service between Norwich and Sheringham. It is perfect for holidaymakers too, passing through many of north Norfolk’s best-loved villages – neat, cobblebuilt clusters like Blakeney, Stiffkey and Brancaster. Eco-conscious (or just plain car-less) birdwatchers use it to get to the wader-rich marshes around Cley-next-the-Sea, Norfolk’s birding Mecca; walkers take advantage of a one-way ride in this coastal fringe of linear footpaths that make circular walks difficult; retired locals use it for pension-day outings to King’s Lynn or Cromer. Summer or winter, if you look inside the bus you’ll find a microcosm of the north Norfolk community. 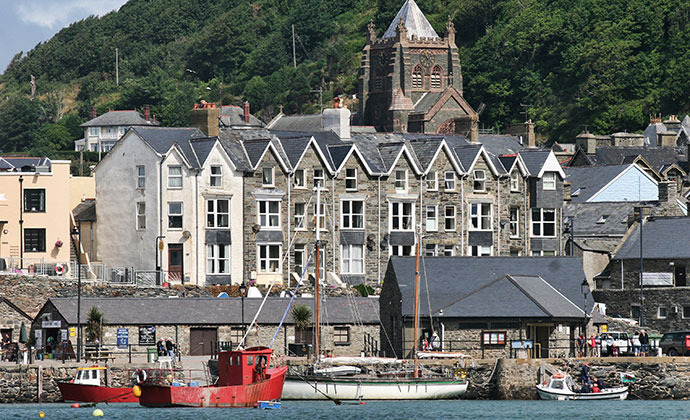 Wales boasts some of Europe’s most spectacular scenery and a great network of bus services. This 60-mile journey is one of the longer-distance routes branded as TrawsCambria or TrawsCymru. From Wrexham, the largest town in north Wales, our journey tracks south and west, following the delightful valleys of the Rivers Dee, Wnion and Mawddach until it reaches the coast at Barmouth. The railway used to come this way, until, like so many other rural lines in Britain, it fell victim to Dr Beeching’s sharp axe. Happily public transport survives in the form of the bus, so take a seat and enjoy! 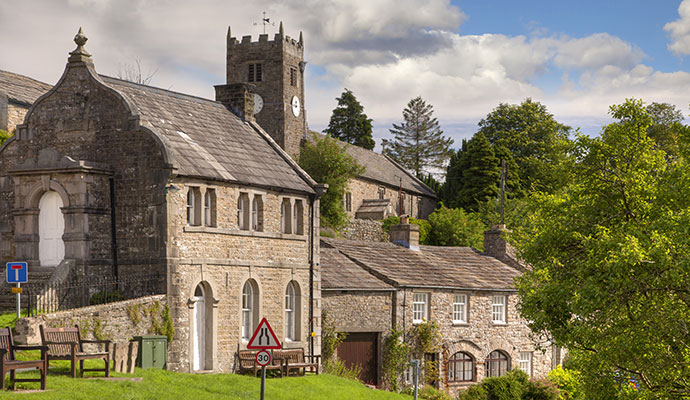 Muker is just one of the many Dales villages passed through on the Morecambe to Richmond route © Andrew Roland, Dreamstime

This three-hour journey on the Northern Dalesman is really a one-off . Perhaps no other regular scheduled bus service in England allows the traveller to enjoy such a remarkable range of landscapes. More’s the pity – it runs little more than two-dozen times each year. Those with an appetite for bus timetables will find year-round services that cover some parts of the same route. But not all: this is the only bus route that takes in the spectacular Buttertubs Pass – the ‘up and over’ mountain road that links Wensleydale with Swaledale. It crosses the Pennines to link the historic county town of Lancaster with the market town of Richmond, along the way taking in some fabulous mountain and moorland scenery. 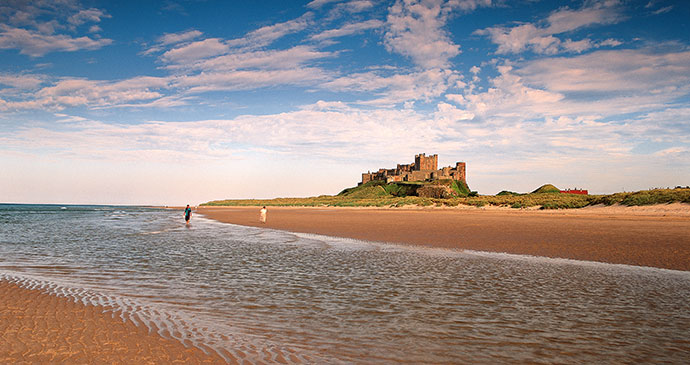 Newcastle upon Tyne to Berwick-upon-Tweed

This route offers a splendid panorama of coastal Northumberland – made possible by the Arriva X18 bus service. Travellers in a rush to get to Scotland can trim an hour off the journey with the X15 from Newcastle to Berwick, but the X18, albeit slower, is much the more adventurous route. It takes in castles galore: Alnwick, well preserved and with a flourishing garden, lonely ruined Dunstanburgh, and Bamburgh, rebuilt in Victorian times. This is undemanding country, with views that stretch for ever. 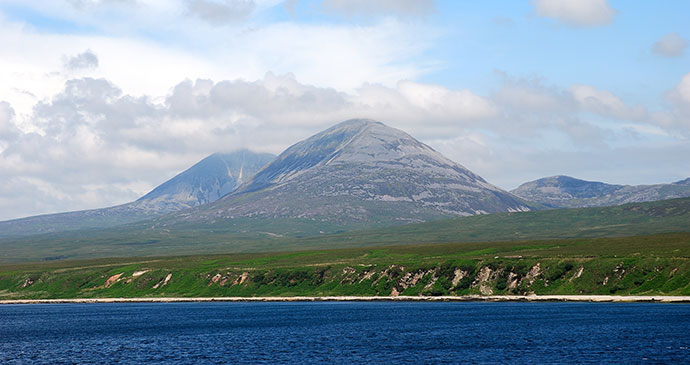 The route across the Hebridean islands passes the spectacular Paps of Jura © Weetonpics, Dreamstime

Separating the Inner Hebridean islands of Islay and Jura is the Sound of Islay, a narrow stretch of sea which is notable for its powerful tides. Just after three every afternoon the MV Eilean Dhiura whisks passengers across from Port Askaig on Islay to Feolin Ferry on Jura, where a minibus is waiting by the concrete slipway. This is the 456 to Inverlussa. The journey takes you some 25 miles along a single-track road, making a ten-minute stop en route at Jura’s main settlement of Craighouse.

Inspired to hop on the top deck? Read about these routes and more in our brand new edition of Bus-Pass Britain, a collection of 50 of the nation’s favourite bus routes.