While the mountains of Ladakh and Zanskar connect earth and sky quite literally, the ancient monasteries provide a spiritual bridge between worlds past and present.

The early religion of Ladakh and Zanskar was the animistic Bon, worshipping spirits and mountains. Even these days at New Year, people give recognition to these spirits as Protector deities, and in the Dard regions, people still celebrate Bono-Na festival every two in three years.

It is believed that Buddhism was introduced to Ladakh before it arrived in Tibet, during the Third Buddhist Council in Kashmir (272–232BC) when Emperor Asoka sent a Buddhist missionary to Ladakh. Evidence for this includes an early Kushan-period stone cave in Sani, Zanskar, which dates from somewhere between 100BC and AD500. Contemporary rock carving can be seen at Khalatse and Mulbekh, and also in the giant Buddha at Kartse Khar.

Conversely, early Mahayana stone carvings may in fact have travelled here from Tibet: statues of Buddhas and bodhisattvas from these periods can be seen in the Zanskari villages of Karsha, Padum, Tong-de and Mune.

During this period however, though the Tibetan emperors were at their height, Tibet still had a somewhat limited knowledge of Buddhism. Around 600–800, Tibetan Buddhism started to travel from India towards Zhang-Zhung in western Tibet. Around 842, after the assassination of the Lang-dharma, the last emperor of Tibet, his descendants moved further west to establish a new kingdom which included the provinces of Rudok, Purang and Guge. 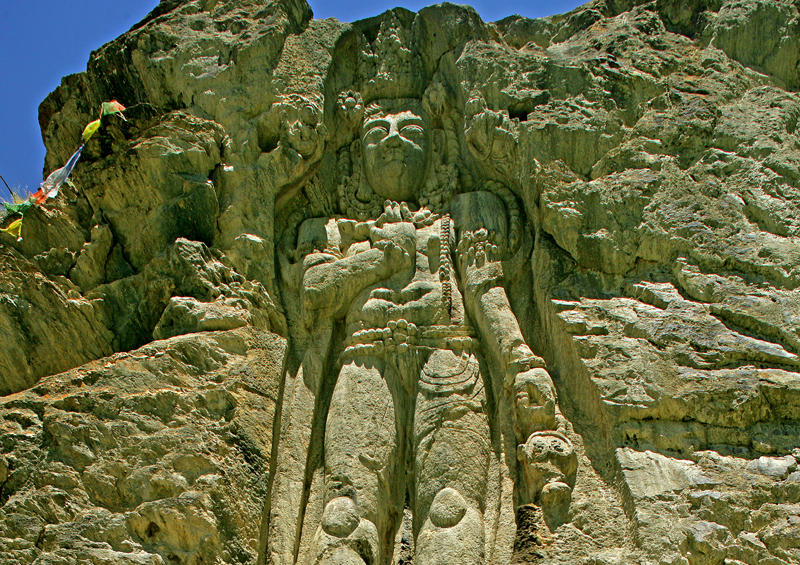 As Buddhism started to find its niche, one of the kings of Guge, Ye-shey-Od, became a monk. In order to improve the quality of Buddhism and to propagate the new religion, he invited Atisa, a scholar and a professor of Nalanda University, to be his teacher. He also sent a group of young students to study Buddhism in India so they could return as learned men and help to spread Buddhism in Tibet.

Only two students returned, one of whom was Rinchen Zangpo, a great translator and artist. He established the monastery at Alchi and, later, Sumda and Mangyu monasteries, which were built with the help of Kashmiri artists. These are some of the oldest monasteries in Ladakh.

Although Buddhism may have taken root in Ladakh and Zanskar earlier, Tibet was the country that introduced the Mahayana form of Buddhism here. Travelling Buddhist hermits, scholars and teachers influenced and gave shape to Ladakhi and Zanskari Buddhism. Padmasambava, known as ‘the Second Buddha’, visited Baltistan, Kargil, Phokar-Zong and Sani, meditating in caves along the way. In Sakti village, the U-rgyan rock bears imprints of his body, and the Thagthog Gompa was built in a cave where he meditated. This monastery still follows the Nying-ma-pa school of Buddhist thought, founded by Padmasambava and Santaraksita, and it is the only one to do so in Ladakh.

Around 935–1045, the great yogi and pandit Naropa meditated in Dzongkhul cave in Zanskar (the site of the Dzongkhul Gompa). His teachings were based on oral traditions, and he passed on his wisdom to disciple Lama Marpa, who in turn passed it on to Milarepa. This lineage later became known as the Kagyu (or Kagyupa) tradition. Similarly, Stongdey Gompa was founded by Lama Marpa (it is also known as the Marpa Ling).

Ladakh is also known as Little Tibet because of its religious, cultural and architectural resemblance to Tibet.

Roughly at the time of Rinchen Zangpo, a famous Zanskari translator called Phagspa Sherab (also known as Zanskar Lotsawa) translated parts of the 200-volume Bstan-gyur. It is said that he founded Karsha and Phugthar gompas in Zanskar, monasteries that now follow the Gelugpa school.

After Rinchen Zangpo, the school of Bka-dam-pa founded by Atisha and Bromton flourished in Ladakh. In the 13th century, however, Je Tsongkhapa founded the somewhat more austere and scholarly Gelugpa (Yellow Hat) school of Tibetan Buddhism. It is said that one of Tsongkhapa’s main disciples, Sharap Zangpo, founded the monastery of Diskit in the Nubra Valley and Stagmo Lakhang in Stagmo, travelling to Zanskar to set up the Gelugpa lineage at Karsha and Phugthar gompas. He died in Phugthar, where a stupa containing his relics remains, and is known as Sharap Zangpo’s Stupa. Later on, his nephew Paldan Shera founded the monastery of Thiksey.

King Singay Namgyal, the Lion King, ruled Ladakh between 1590 and 1620, and during this period Ladakh enjoyed an excellent relationship with Bhutan. The Lion King sent his son to Bhutan to become a disciple of Lama Stag-tsang-ras pa, a renowned Tibetan monk known as the Tiger Lama. The lama became teacher to both father and son, and together they founded the gompas at Hemis, Chamre and Hanley.

While the mountains of Ladakh and Zanskar connect earth and sky quite literally, the ancient monasteries provide a spiritual bridge between worlds past and present. The culture and tradition of Ladakh and Zanskar promote the notion of interdependence and sustainability: two reasons why people have thrived for thousands of years in such a harsh environment. Ladakh, which is also known as Little Tibet because of its religious, cultural and architectural resemblance to Tibet, has prompted the Dalai Lama to state that Ladakh and Zanskar are two places beyond the borders of Tibet where the future of Tibetan Buddhism may thrive.