(The bread is in the basket, the key in heaven.) Tajik proverb 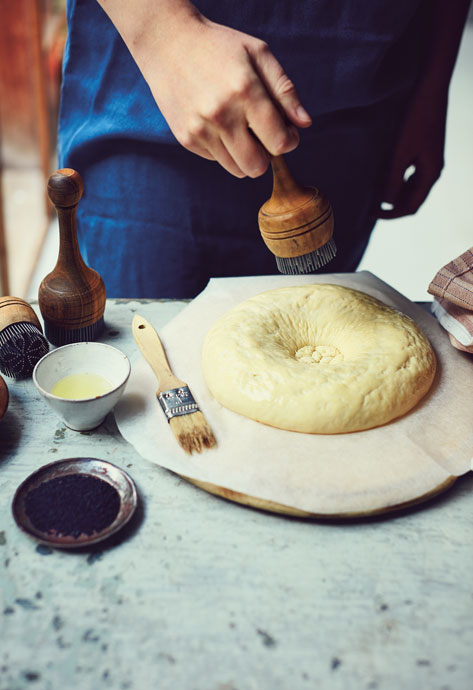 It is lepyoshka to the Russians and çörek to the Turkmen, but to the Uzbeks and Tajiks, it is simply ‘non’ (the word is Persian, but it is often transliterated as naan, and pronounced nahn). Right across Central Asia these golden discs of bread are served at every meal along with steaming cups of chai.

Of all the peoples who bake non, from India, Pakistan and Afghanistan to Central Asia and Iran, it is the Uzbeks who have turned this fabled bread into an artform. Generally, non is golden coloured, the diameter of a dinner plate (but can come as small as a saucer or as big as a bicycle wheel) with a depressed centre containing an indented pattern. A bit like a bagel, it is chewy, soft and crisp all at once.

Throughout Uzbekistan different cities and provinces produce their own distinctive non. In Samarkand – where there are at least twenty different variations – it is heavy with a dark crust, while in the capital, Tashkent, it is lighter, softer and less dense. In the ancient open-air museum-city of Khiva, non is noticeably thinner and crispier.

Differences aside, baking non follows a simple, time-honoured sequence. The nonvoy (non baker) takes the dough, weighs it out, rolls it flat, stamps the bread with the decorative pattern and then brushes the dough with an oil, egg or milk wash, which adds a golden sheen. It is then sprinkled with onion seeds before being slapped onto the walls of a very hot clay tandoor oven.

Once always made at home, nowadays non is increasingly sold at bakeries and markets in Uzbekistan. At the break of day leagues of men load up their bicycles with non in preparation for their morning deliveries.

Special non utensils litter the markets and one of the best souvenirs to take home are chekich, the little tools with a hardwood handle and long metal teeth used to stamp floral or geometric patterns into the non. The reason for stamping the non is not solely decorative: chekich also release steam, which stops the centre of the bread rising in the oven, keeping the middle crisp whereas the outer ring is soft and chewy. The more ornate stamps are brilliantly decorative and notable nonvoys have their own designs that they use as signatures.

Visitors to Central Asia need to know the special status of non. Here, if non is dropped on the floor, it must be placed in a place high up, like a window ledge, for beggars or birds. It is always torn by hand, never ever cut with a knife and it is never placed patterned-side down. At weddings, the bride and groom both take a bite of a non at the ceremony and then finish it the next day as part of their first meal as man and wife. Family traditions also dictate that if a soldier goes off to war, he takes a bite of non as he departs and his family will hang the bread up and only take it down once he is safely home.

Non is the flatbread that is made the length and breadth of Central Asia. It is usually baked by being slapped onto the searingly hot clay walls of a tandoor oven. At home, using a pizza stone and the oven cranked to maximum is the best way to achieve the characteristic chewy elastic texture.

Put the flour in a large bowl, add the dried yeast to one side and the salt and sugar to the other. Make a well in the centre, pour in 125ml water and mix thoroughly. If it feels stiff, add a little more water to make a sticky dough. Turn onto an oiled surface and knead for 10 minutes until the tackiness has gone and the dough is silky soft and smooth. Form into a ball and put in an oiled bowl. Cover with a tea towel and leave to rise for about 2 hours, or until at least doubled in size.

Knock the air out of the dough and form it into a domed round. Sit it on a floured wooden board lined with a piece of baking parchment and cover again with the tea towel. Leave to prove for a further 45 minutes, or until doubled in size again.

Preheat the oven to 240°C/gas mark 9, or as hot as it will go, and put a pizza stone or baking sheet in to heat up – it needs to get really hot before you bake the non.

Make an indentation in the middle of the bread by pressing with the heel of your hand, leaving a doughnut-shaped ring around the edge. Pierce a pattern in the middle using a non bread stamp or the tines of a fork. Brush the top with oil or lard and sprinkle over the onion seeds. Trim the excess parchment from the sides of the bread.

Put a handful of ice cubes on the floor of the oven – these will create steam. Use the board to lift the bread to the oven and carefully slide it (still on the baking parchment) onto the preheated stone or tray. Bake for 15 minutes. The top should be golden and the loaf sound hollow when tapped underneath. 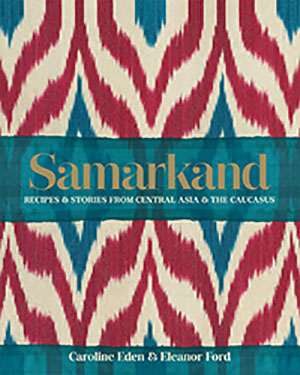 Taken from Samarkand by Caroline Eden and Eleanor Ford. Photography by Laura Edwards.