With input from Heidi Munan, cultural researcher and Honourable Curator of Beads at the Sarawak Museum, who has lived in Kuching for over 33 years. 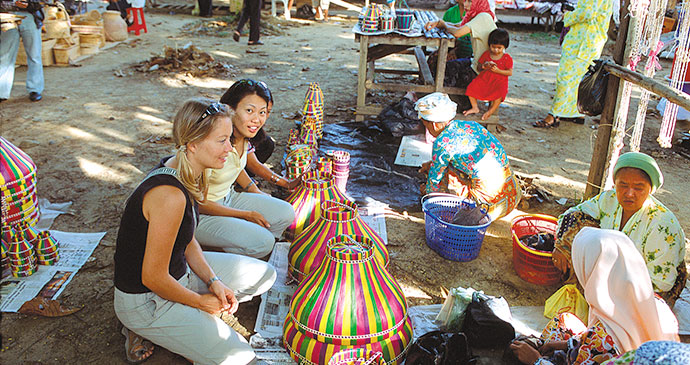 The Dayaks of Borneo have a long, vibrant beadwork culture. Beads were held to impart their two salient properties – physical strength and brilliance – to the wearer. Small glass beads were brought by traders from distant lands, which added to their mystical value. The manufacture and use of bead-worked garments and ornaments was traditionally linked to a person’s status within society. This applies particularly to the people of Central Borneo, where the most potent designs were restricted to the aristocracy. Beadwork itself was gender-defined in that only women threaded the beads, but men designed the patterns. Today, many old taboos and restraints have become obsolete. Not so the craft of beadwork – beadwork is produced for sale in the coastal towns; some young designers incorporate traditional design in their fashion creations. Much beadwork is still done for home use and at regional festivals; the young women are covered in more beads than their grandmothers ever dreamt of owning! The skills are passed from mother to daughter and materials are readily available. In sum, beadwork is flourishing in Borneo.

Bead culture is strong in Sarawak’s Kayan, Kenyah, Bidayuh and highland Kelabit communities, and among Sabah’s Rungus population. In her book Beads of Borneo, Heidi Munan explains that, excluding beads made from bone, teeth, seed and stone, many beads used in tribal crafts have long been imported. From as early as the 6th to the 12th century, trade with China and India brought beautiful, exotic beads. An ancient Kelabit headhunting song says that ‘strangers came to buy pork and sell beads’. Later, Dutch and English explorers brought Venetian and Bohemian beads.

Beads of varying value were used to mark out social status between the indigenous aristocrats, and the middle and lower classes within tribes. Among the Kelabits, for example, lower classes were rarely allowed to wear beads or bear traditional motifs, says Heidi. ‘Aristocrats would buy or exchange slaves with different families, using beads as a form of payment. If you were captured during tribal war, your family may have used beads as ransom payment.’ With so much power accorded to these little gems, beads were also used in a spiritual sense – for example during agricultural rites to bless planting and harvesting of crops.

The Kelabits, both men and women, still live out the bead tradition and are busy handing it on to younger generations. Women regularly wear bead necklaces and belts made from peppercorn beads; on special occasions such as weddings, they don the bead caps called pata made from the noble ba’o rawir – drinking straw beads. Men sport kabo – red seed bead bobble – with their Sunday suits or batik shirts.

Beaded creations have become popular among tourists with a couple of major downsides – rising prices, fake productions and the loss of antique beads to faroff lands. ‘Short of breaking the beads,’ says Heidi, ‘it’s hard to tell the difference.’ The proliferation of fakes is getting to the point where the Kelabits were even reported to be looking at a certification system, with the authenticity of bead creations authorised by the Pemanca or high chief of the Kelabit community.

Personally I don’t care if the beads I buy are not old – I would rather those artefacts be kept among those who made them. However, I do not want cheap, machine-made replicas. A traditionally made creation hanging close to you is something to treasure.

New pata caps sell for around RM1,000 while an antique one can fetch well over RM20,000. Individual antique beads can cost from RM300 to RM1,000. Heirloom beads are priceless.