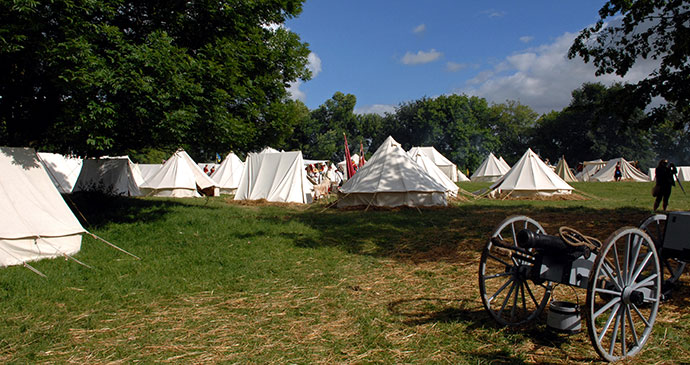 The weapons of the Napoleonic Wars caused atrocious wounds. Cannonballs were capable of taking a man’s head clean off; canister (grapeshot) and musket balls would shatter limbs and smash into soft tissue. The artillery caused most wounds, mainly to legs.

The prime treatment for damaged limbs was amputation, with a saw, with the victim held down by orderlies. A tourniquet was applied to shut off the blood supply, severed arteries were tied with thread, a flap of skin was sewn over the stump, then bandaged. There was no anaesthetic – that was first introduced in the 1840s – and little understanding of hygiene and infection. Nonetheless, survival rates were reasonably good: 60–75% for amputated legs, for instance. Musket balls and shrapnel could be extracted by forceps, and it was vital also to remove shredded uniform cloth and mud that entered the body with them, to prevent gangrene. Serious wounds to the abdomen tended to be fatal.

The French were rather more advanced in battlefield medicine on account of the pioneering work of Dominique-Jean Larrey (1766–1842), Chief Surgeon to the French army from 1797 to 1815, who was present at Waterloo. He recognised that speed of treatment was a key factor in recovery, and so did everything to get wounded men off the battlefield as soon as possible. One of his contributions was the ambulance: a light carriage with a stretcher, attended by trained crews.

Surgeons worked for days after the Battle of Waterloo, treating thousands of wounded men. One of these was the 21-year-old Louis-Joseph Seutin (1793–1862), a Belgian doctor who had formerly served under Larrey in the French army. At Waterloo he was a surgeon for the Anglo-Allied forces, working in an improvised field station where he carried out 32 amputations in a day. Later he became famous as the father of plaster-cast bone-setting.

To buy our Waterloo guide (also available as an eBook) now, click here: