One of the features of this fascinating country is their long expertise in the art of stone-carving and in particular their carved cross-stones, or khachkars.

As some in St John’s will know, I have an interest in Armenia, a country about the size of Belgium which lies to the north of Iran and to the east of Turkey. It was the first country in the world to adopt Christianity as the state religion. That happened in AD301 which was even before the conversion to Christianity of the Roman Emperor Constantine in AD312.

We first visited Armenia in 2001 and one of the features of this fascinating country is their long expertise in the art of stone-carving and in particular their carved cross-stones, or khachkars. I immediately noticed striking similarities with the carved stone crosses of Scotland, Ireland and Northumbria, especially the interlacing patterns so familiar to us from Celtic artefacts.

Armenia has over 40,000 surviving cross-stones, all different. Many are gravestones. Securing salvation of the soul was the commonest reason for erecting cross-stones but some were put up to commemorate military victories or the completion of churches, bridges, fountains and other constructions. Even unrequited love might be commemorated this way.

The dominant feature of the design is generally a cross, occasionally a crucifix, resting on a rosette or sun disc symbolising eternity. The remainder of the stone is covered with complex patterns of leaves and bunches of grapes (rather like the altar rail at St John’s) or with interlacing and other geometrical patterns. Occasionally the whole is surmounted by a cornice showing biblical scenes or characters. 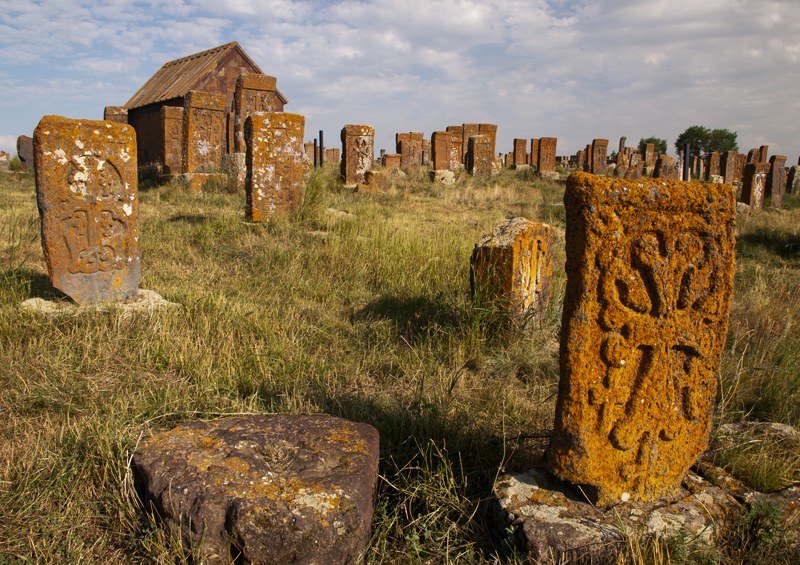 The peak of Armenian cross-stone design was between the 12th and 14th centuries. One stone carver produced such elaborate work that he was known as ‘the embroiderer’. The art fluctuated over the centuries, decline often coinciding with one of the many invasions suffered by Armenia.

The artistic heights of the 14th century were never regained but stone-carving, including the making of cross-stones, is still a very active art form in Armenia today. To see the carvers at work, even in the centre of the country’s capital, is to witness the successors to well over 1,000 years of tradition.

Is it just coincidence that such similar patterns are found in places as far apart as Armenia and Scotland? Possibly not. We tend to forget how much travel and commerce there was, especially by sea, millennia ago. Armenia was on the ancient silk route and at the height of the Armenian empire its boundaries reached the eastern shores of the Mediterranean Sea. Craftsmen travelled extensively, taking ideas and expertise with them, so perhaps similarities in the carved crosses of Scotland and Armenia are not accidental. In which direction did the influence flow? The Armenians like to think that it was from east to west.