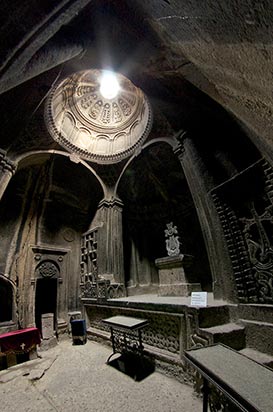 At the end of three of the gospels Jesus is variously recorded as commisioning his disciples to ‘make disciples of all nations’ or to ‘go into all the world and proclaim the good news’.

The fact that much of the rest of the New Testament is based on Paul’s missionary journeys to what is now western Turkey, Greece and Italy, that the New Testament letters were to churches in these same regions and that Rome featured so largely in western Christianity, means that we know much less about the apostles who went in other directions.

Traditionally, Mark the evangelist went south to Egypt and founded what became the Coptic church. Thomas went east, through what is now Syria and Iran, to India where the Thomas Christians of Kerala believe theirs is an apostolic church, founded by one of Christ’s disciples. Likewise the Armenian Apostolic Church is believed to have been founded by two of Christ’s disciples, Bartholomew and Thaddeus (also called Jude or Judas, son (or brother) of James).

Today Armenia is a small country (about the size of Belgium) north of Iran and east of Turkey. Historically it occupied a much larger area stretching from the Mediterranean to the Caspian Sea and including land in what is now eastern Turkey, Syria and northern Iran. Christianity was adopted as the state religion AD301, even before the Roman Empire did so, thus making Armenia the first Christian state.

Those who have visited the Holy Land will know there is an Armenian quarter in Jerusalem and that the Armenian Church is one of those safeguarding the holy places. The invention of the unique Armenian alphabet in AD405 and the subsequent translation of the Bible into Armenian by AD425 meant that Armenians had the Bible and church liturgy in their own language and no longer had to use Greek or Syriac as previously. (For comparison, the first translation of the whole Bible into English was Wycliffe’s of 1382.)

Some basilica churches of the 5th–7th centuries can still be seen but often ruined by the ravages of time, invading armies (over the centuries Armenia has been invaded and ruled by Assyrians, Medes, Persians, Arabs, Seljuk Turks, Mongols, many of them hostile to Christianity) and earthquakes (Armenia is in an active seismic zone). Most Armenian churches are built of tuff, a relatively soft rock which hardens on exposure to air making it ideal for carving and many churches have carved decoration both inside and out. The tuff comes in a number of colours, mainly red but also black and yellow, allowing polychrome decoration. Because of the risk from invaders Armenian monasteries were often hidden in remote, and thus spectacular, mountain locations.

This long Christian history means that Armenia has a wealth of ancient churches and monasteries many of which form highlights of any trip to Armenia. Over the past 13 years I have visited numerous churches in this fascinating country, ranging from large cathedral-like buildings to tiny chapels, some of which even preserve evidence of having been built on pre-Christian religious sites. For example, the cathedral at Ejmiatsin, the spiritual centre of the Armenian church, equivalent to Canterbury for the Anglican communion or Rome for Roman Catholics, was originally built as a hall or basilica church in the 4th century on the site of a pagan temple. In spite of being rebuilt to a cruciform plan in the 5th century and extensively renovated in the 17th century, the pagan altar still exists underneath the present altar.

The distinctive and most abiding feature of Armenian churches is a cupola, or pointed dome, supported by a cylindrical tambour. Such tambours and cupolas were added to basilicas but churches built to a centrally-planned cross shape soon predominated and remain the preferred shape to this day. Possibly because of the earthquake risk, rather than build a larger church when more space was needed the usual option was to build a second church beside the first, then a third etc.

Consequently monasteries often comprise a multitude of buildings and individual churches can be quite small. A curious style was to build a small church on top of another building, such as a church, a mausoleum or even an entrance gate. If then topped with a belfry a three-tier structure resulted. Still more unusual is the UNESCO World Heritage listed 12th–13th century Geghard Monastery where in addition to surface buildings whole churches are carved out within the rock.

Circular churches are another variant on the centrally focussed building. Actually most are polygonal rather than truly circular. An unusual new ‘circular’ church has recently been built in the cathedral precinct of Ejmiatsin. With a relatively small base and with a tambour almost the same diameter as the base it resembles a tall cylinder. The crosses separating the high windows look like a circle of people holding hands – perhaps dancing or saying The Grace together.