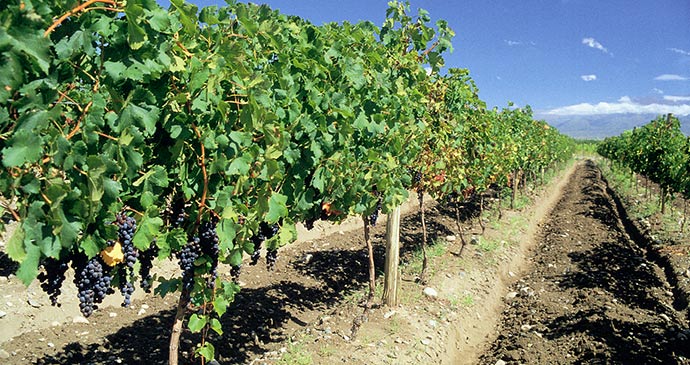 In the past ten years Argentina has become one of the recognised ‘New World’ wine producers and is giving some competition to the longer established industries in the USA, Australia, New Zealand, South Africa and Chile. Ancient vines had been brought from Europe in the mid 1800s and wine-makers concentrated on producing high volumes but with low quality and thus no export market. Modernisation in recent decades began to see better production of the noble French varieties Cabernet Sauvignon, Syrah, Merlot and Pinot Noir and Italian Bonarda among the reds, and Chardonnay, Semillon and Sauvignon Blanc as well as the German Riesling and French Viognier among the whites.

Ancient vines had been brought from Europe in the mid 1800s and wine-makers concentrated on producing high volumes but with low quality and thus no export market.

Most interesting was the realisation that the Malbec grape, from the south of France, adapted to the Argentine soil better than it had to its tierra madre, its mother soil; Argentine Malbec is not only among the world’s best Malbecs but is also seen as the national wine, being perfectly matched to steak. Similarly, the Tempranillo grape, of Spanish origin, is not common elsewhere in the world but in Argentina is third in importance (in terms of area planted), following the Bonarda and Malbec varieties. The emblematic white is the Torrontés, grown only in the Iberian Peninsula and in Argentina (including Salta province), where it too has done better than in Europe; it generally gives a light wine but with strong Muscat-like aromas.

Argentina’s wine-making region stretches for 2,400km along the Andean foothills from Salta to Río Negro. The most important region is Cuyo and above all the province of Mendoza, where wine-producing regions are divided into zones according to climate, elevation and soil. The Upper Río Mendoza Zone is situated at 800–1,100m and is where the Malbec grape prospers and where most of the noble varieties have adapted. The Northern Zone is suitable for the fruity whites and young reds, while the most productive is the Eastern Zone; they are both set at 600–700m.

The Uco Valley is at 800–1,400m, making it a colder zone producing wines with good acidity. San Rafael, at 450–800m, has its own Denomination of Origin. Finally, at 600m in San Juan province, the Tulum Valley has a dry and warm climate with alluvial sands and permeable clayish soils that produce a great variety of grapes, notably Syrah/Shiraz. At altitudes of 1,000m or more the grapes stay on the vine for 150 days, as against just 100 in France, giving the wines more fruit, freshness and complexity and less tannin.