In this extract from Christian The Lion: The Illustrated Legacy, John and Ace say their last goodbyes to Christian.

We arrived at camp to find that George had not seen Christian while Tony was away but had heard him mating with a wild lioness. He guessed he was no more than five or six miles away; a lion’s roar can travel up to ten miles if the conditions are right. Three days later Christian appeared at Kampi Ya Simba. Did he know we were there? There has been much conjecture about how lions communicate when seemingly out of sight of each other. While hunting they can be observed fanning out over a wide area, yet when one lioness attacks, her sisters are in position to ambush the fleeing target. George had often recounted historic ‘coincidences’, when he’d found his lions waiting for him at a favourite spot in Meru, sometimes months after he had last visited them. 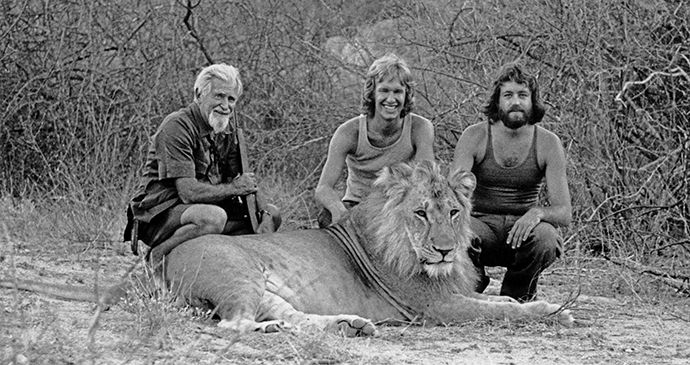 When Christian strolled casually into camp on the third evening, our first, and overwhelming, impression was of his size. At only three years old he was still growing, yet. George estimated that he already weighed nearly five hundred pounds. How could Juma and Lisa have preferred Scruffy to this magnificent specimen? It must surely be down to ‘experience’, as in lion years Christian was still a teenager.

He was as vocal as ever with his greetings, though the grunts were deeper, and he pushed and shoved as he rubbed himself against us in his excitement. George was knocked right off his chair, spilling his precious White Horse Whiskey, which did not amuse him. Christian greeted us all in rotation, from George to Ace to me – and to Tony, of whom we could see for the first time how fond he was. 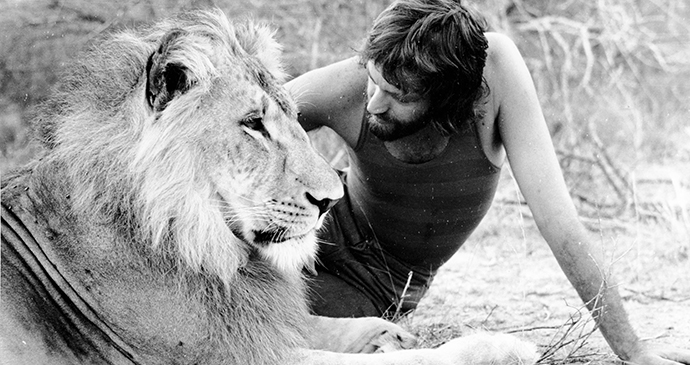 That evening we over-celebrated, and even Christian looked exhausted the next morning. When we went for a walk he soon settled down under a cool, rocky overhang, where he would spend the rest of the day with the lionesses – who grimaced at the human smell that he had acquired by spending time with us. For the next eight days, we either walked with Christian or just sat beside him on his favourite rocks overlooking the camp. It seemed he was maturing fast, and was no longer the playful cub or even the exuberant teenager who had jumped on George and Tony.

On our last day, we drove out to find Christian and say goodbye. We didn’t know for certain that this would be our final farewell but we somehow suspected it. When we found him, he jumped up to greet us and climbed onto the Land Rover, rubbing heads and making that wonderful familiar grunt. Finally, he jumped down. As we drove away he trotted behind us for a while, but only half-heartedly. It was a quiet drive back to camp, and a subdued return journey to Nairobi.

To learn more about Christian’s life, take a look at his illustrated legacy.