There I sat outside the Marks & Spencer’s at Gatwick airport’s South Terminal, with clammy hands and butterflies in my stomach. It was 13.00. No-one was there. Why not? Had they missed their trains? Had they broken down? Had they all dropped out at the last minute? ‘So it begins,’ I thought, worrying on behalf of 14 other students. Because this was my designated role: Expedition Leader of the DUCK (Durham University Charities ‘K’ommitee) charitable trip to Peru.

Luckily, the team did decide to show up eventually – one clutching a spilling strawberry tart (the last safe dairy product to be consumed for the next few weeks), another grasping a guitar (‘It’ll be fine, I’ll get it through customs, no bother’) and one more already asking what time the shops in Cusco shut, and where would be a good place to buy a stamp and a postcard. All this, bearing in mind that I had never set foot on South American soil in my life, made me realise that this was not going to be a ‘holiday’ in any way. 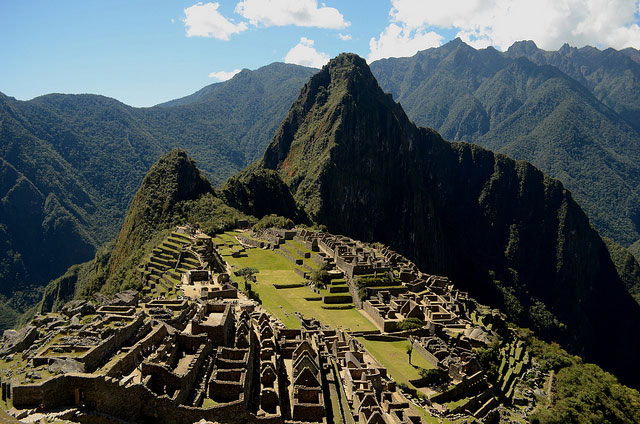 And I was right – but mainly because of my own inability to sit still, and the itinerary I had drawn up for the group was absolutely jam-packed (despite steering clear of more strawberry tarts). After over 40 hours of travelling, followed by just three days of rest and acclimatisation in Cusco (at an altitude of 3,400m), the team and I embarked upon our first adventure: the five-day Salkantay Trek to Machu Picchu. This 50km route is far less touristy than the famous Inca Trail, and offers a greater challenge and more impressive scenery. This was no Lake District, as I was used to back in England. Oh no. Stretch all of those English molehills upwards into the shockingly clear sky until they tower above you, all 6,500m of them. Then, steepen the sides so that instead of Cumbrian scree slopes you’re left with edges on the brink of avalanching. Next, suck 40% of the oxygen out of the air, and you’ll have left the Lakes far behind – this is true Andean trekking.

There were no signs of life other than our motley crew, and the complete isolation high in the Andes was exhilarating.

After a three-hour drive from Cusco, and a brief stop-off in Mollepata to buy hand-hewn walking poles (for the Peruvian equivalent of £1), we began to wind our way closer and closer to the indomitable mountain, Salkantay (Quechuan for ‘Savage Mountain’). Due to altitude sickness within the group, this first day was cut relatively short, and we arrived at our campsite at around 16.30. When I say campsite, what I mean is a large grassy plain, pockmarked with boulders, right at the base of the Salkantay glacier. There were no signs of life other than our motley crew, and the complete isolation high in the Andes was exhilarating. We settled down to eat our evening meal, and in fact dined like Incan Emperors for the entire five days. The cooks from the Wayki Treks team (‘Wayki’ is a Quechuan term of endearment, loosely meaning ‘friend’, ‘family’ or ‘brother’) produced all kinds of regional delicacies. A glass of warm bean juice or mug of steaming coca tea accompanied choclo con queso (corn and cheese), pumpkin soup, grilled trout, garlic bread, rice, yuca potatoes from the jungle, sponge cake, lomo saltado (a stew-like meat and vegetable mixture), fried aubergine, banana and rum fritters, quinoa, vegetable frittatas, apple porridge, grilled plantains, hot kiwi, stuffed peppers … the list goes on.

After the delicious and warming meal, we zipped into our tents in preparation for the cold night ahead. The Quechuan stories that our guides had whispered to us over coca tea whirled around inside my head, and the temperature drop to -14°C, alongside the excitement at being so close to the glacier, meant I was awake for most of the night.

The second day of the trek took us up the gruelling Salkantay pass to the high-point of Abra Salkantay (4,630m above sea level), overshadowed by the foreboding glacial mountains around us; Salkantay to our right and Huamantay to our left. We heard an odd groaning noise, and saw an avalanche cascade down the mountain above us. Our guide told us an Andean legend, passed down by his grandparents whilst he was growing up in this area – that the Mountain God of Salkantay caused avalanches in order to stop evil spirits, condenados, from reaching the top of the mountain and therefore the gateway to heaven. Evil spirit or not, seeing a demonstration of the mountain’s power was enough to catch the little breath we had left in our straining lungs.

Luckily for us, the fantastic guides from the indigenously owned Wayki Treks Company kept us safe from any evil spirits, and for the next two days we continued to descend further and further into the jungle. It was a fascinating journey through the diverse landscape, from the barren moonscape of the mountains down to the lively and muggy jungle.

After a stop-off at a coffee plantation to watch the World Cup Final between Germany and Argentina with some locals (around 50 people crammed around a postage-stamp sized screen), we began our fourth day of walking. The route took us past an impressive hydro-electric station, and then followed the train tracks 12km through the jungle to the town of Aguas Calientes, where we would stay the night before visiting Machu Picchu the following day. Through the trees throughout the day we caught glimpses of Machu Picchu (‘Old Mountain’) high above us, as well as Huayna Picchu (‘Young Mountain’) and sections of the Sacred City itself. Morale was high, the path was easy, and as we got closer to Aguas Calientes, finally arriving at around 17.00, I could sense the excitement in everybody’s hearts.

Aguas Calientes is essentially a rip-off town. It is the only place to stay before visiting the Sacred City of Machu Picchu, and it takes full advantage of this by throwing expensive restaurant after expensive restaurant at tourists. Despite this, many of them do have a lovely atmosphere, and the cobbled, spiralling streets allow the town to retain a degree of dignity. After an excellent meal provided by the hotel (all part of our Wayki Treks ticket), including Pisco Sours on the house, and a rather odd episode in a bar that involved the waiter running out to buy enough glasses for all 15 of us to have a drink, we hurried to bed. The sooner we slept, the sooner it would be time for Machu Picchu.

I will never forget my first glimpse of the Sacred City. It looks just as it does in the postcards, but what you cannot capture on camera is the majestic and spiritual atmosphere that grips the whole site.

The next morning, we rose at 05.00 to get the bus to Machu Picchu, and joined a queue alongside virtually every other temporary inhabitant of Aguas Calientes.  By 07.00, we were at the park entrance, and there was an electric feel of anticipation throughout the group. I will never forget my first glimpse of the Sacred City. It looks just as it does in the postcards, but what you cannot capture on camera is the majestic and spiritual atmosphere that grips the whole site. The Incan city is surrounded by jungle-cloaked mountains, and the precipitous agricultural terraces sweep down the hillside to Aguas Calientes far below. Wandering amongst the houses, temples and courtyards, the sense of a once-thriving city is almost overwhelming. The history of this intriguing place hangs around you, as thick and tangible as the jungle air itself. 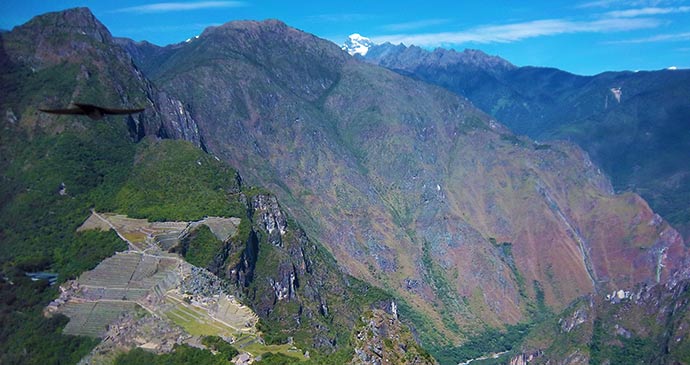 The alternative view from Huayna Picchu shows landmarks of the Salkantay Trek: Salkantay Mountain on the horizon, the railway to Aguas Calientes across the bridge in the valley below, and the Sacred City itself in the foreground. © Alice Evans

Our trekking guide gave us a tour for 2½ hours, cramming our heads with facts and leaving all of us bursting with questions. Perhaps most interesting of all is the clever, anti-seismic quality of the Incan architecture. Built in 1438, Machu Picchu city has survived several large earthquakes, all due to the trapezoidal shapes of buildings, doors and windows, and the impeccably constructed stonework. No cement was used to put the stones together, each of which is carved so perfectly that is fits with its neighbours, leaving no room even for weeds to grow. The many chiselled corners to each stone increase earthquake resistance.

After our tour, we partook in the trek up Huayna Picchu to gain an alternative view of the city. This hot and difficult hour-long climb was a challenging yet rewarding end to our Andean trekking experience, and gave us spectacular views of our route through the Andes. I looked nostalgically to the horizon where Salkantay reared its head forcefully above all else, and down into the valley below to retrace our jungle amble from the day before. All of the last five incredible days could be reduced to a snapshot, trapped in time, but the experience I had on the Salkantay Trek to Machu Picchu is one that will stay with me forever.