In this extract from her new book, A Cheetah’s Tale, Her Royal Highness Princess Michael of Kent discusses how she learned to ‘read’ the calls of Tess, an orphaned cheetah cub.

In the wild, cheetah cubs can depend on their mother to hunt for them and to teach them to hunt from about six months old. But since Tess had no mother to teach her I was very surprised when, at ten months old, she began chirruping to be let out at dawn. For the last two months she had shown signs of wanting to chase prey – mostly quite unsuitably large – but at least it showed she was keen to provide for herself. I began to tape-record her vocalisations to play to Eduardo [local vet] or Benedita in the hope they could explain them to me. 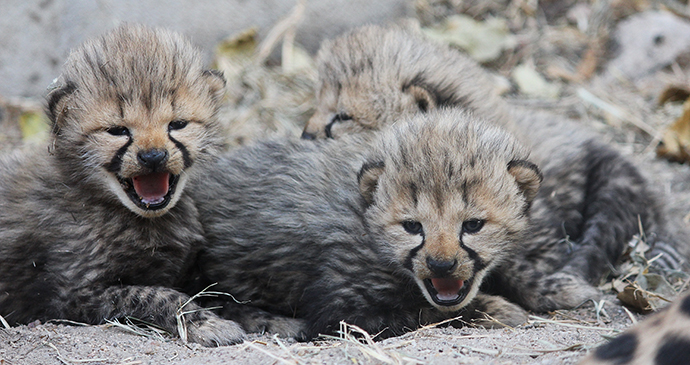 Cheetahs have unique calls for communicating with their mother, their siblings and their own cubs © Christo Schreiber

They told me a great deal, and I have gleaned more over the years. Although I had learned to ‘read’ Tess’s calls, I was unaware of the rest. I knew that cheetahs did not make sounds like the lion, leopard or tiger. They have unique calls for communicating with their mother, their siblings and their own cubs. Since they do not live in social groups, they do not need as large a vocabulary as lions, but they have a very distinct language nonetheless. The first sound I heard from Tess is known as yipping – a short, high-pitched yelp when she wanted to know where I was or where to find her nanny, Ridgeback Daisy. Had she had siblings, they would have yipped or ayipped to call each other. This is the sound I have described as imitating bird calls and is also referred to as chirping or chirruping. I have heard small cubs use this when faced with an unfamiliar adult cheetah through the wire netting of their separate ‘nurseries’ at the Kapama Centre in South Africa. Adult cheetahs also yip, and very loudly if afraid.

Then there is the churr, a sort of stuttering bark cheetahs make when they meet socially. It is a rather cosy sound which mothers make to call their cubs to suckle. At Kapama, I was once filming the first cub of a litter to leave its birthing hut and it approached the wire netting dividing its nursery from that of a very pregnant cheetah on the other side. On seeing the little cub, the pregnant cheetah churred to show interest and repeated the sound even more loudly when the cub’s mother came out to join them. I have not heard males churr, but am told they do it when meeting females, and the ladies tend to churr when anxious about males nearby. More serious is the yowl, which indicates a threat, a long drawn-out moan to warn of danger, especially when a predator approaches a cheetah’s cubs. Cheetahs also hiss, spit, growl and, of course, purr.

If I did not react to any one of Tess’s various vocalisations, she would stamp one of her forelegs most insistently. Thump! thump! Stamping the foreleg while sitting upright is a much used sign of displeasure in cheetahs and one of which to be wary – it was never a sign that she wanted to play!

Want to read more? Buy your copy of A Cheetah’s Tale online and save 10%…