If you’re travelling through southeast Europe and only can fit in a 24-hour stopover in Belgrade then you really should. The city is crammed with with attractions, including trendy streets, leafy parks, unusual museums and mouthwatering restaurants. Here is one potential itinerary to consider. 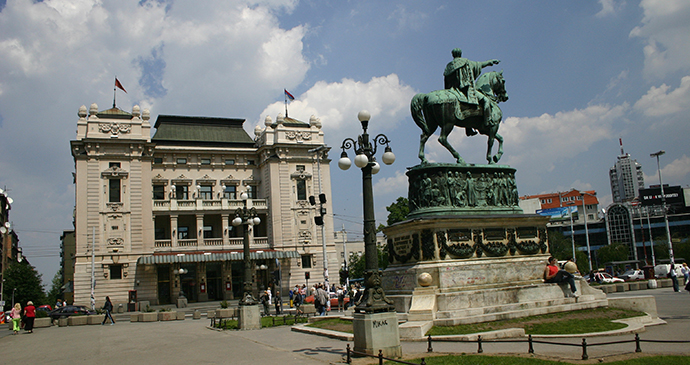 The central Republic Square is as good a place as any to begin. This large, elongated square is flanked by the imposing Neoclassical edifice of the (currently closed) National Museum, with the National Theatre (originally built in 1869, bomb-damaged during World War I and rebuilt with a new facade in 1922) just across to the east. 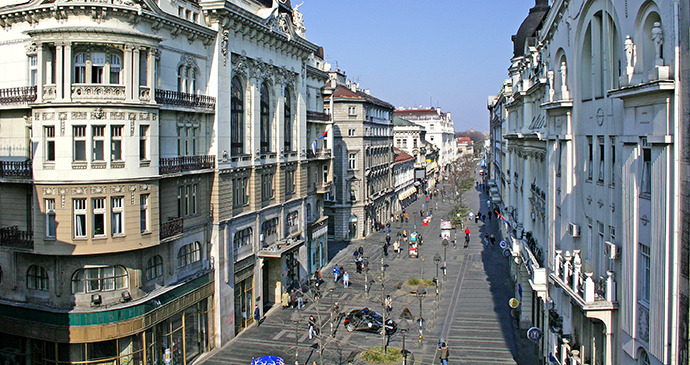 Get a feel for the city by taking a leisurely stroll along the adjoining street, Knez Mihailova. This will give you opportunity to window-shop and to experience the bustling but easy-going atmosphere of modern-day Belgrade. There are a number of fine buildings that are worth a look along Knez Mihailova, including the Library of the City of Belgrade and the Academy of Fine Arts. 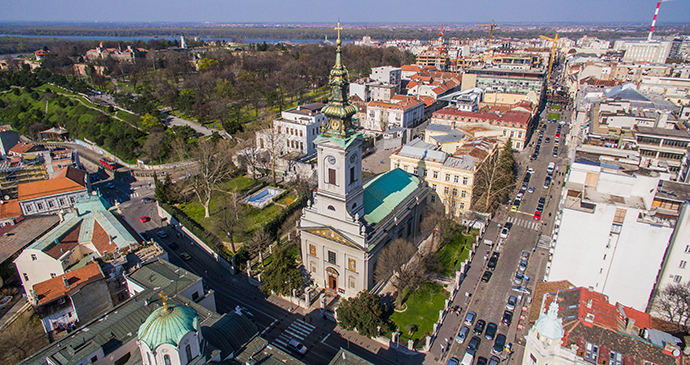 The Orthodox Cathedral, with the roof of ‘?’ just visible between two taller buildings opposite © Tarik Kaan Muslu, Shutterstock

Ensure that you see the Orthodox Cathedral. Prince Mihailo Obrenović (whose statue atop a horse stands on Republic Square) is interred here, along with Vuk Stefanović Karadžić, the scholar responsible for phoneticising Serbian and producing a definitive dictionary of the language. 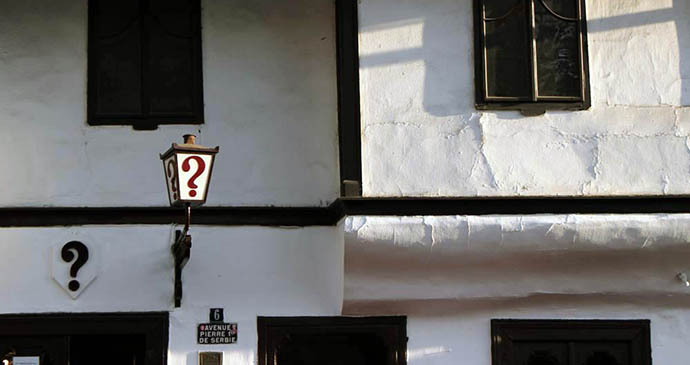 The wood-framed exterior of ‘?’ © Laurence Mitchell

Across the road is ‘?’ café, a traditional Serbian kafana that was built in the 1820s. There were objections by the ecclesiastical authorities to its former name, ‘By the Cathedral’, and so a temporary sign showing a question mark was put up, which ended up becoming its name. ‘?’ is also a rare Belgrade example of a wooden-framed, Turkish–Balkan building. 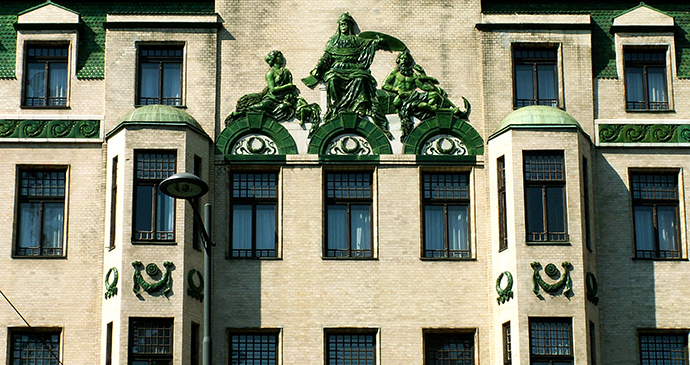 From the end of Knez Mihailova, head south into downtown Belgrade. A short walk soon brings you to the imposing and attractive facade of the Hotel Moscow. This building, built in Art Nouveau style in 1906 for the ‘Russia’ insurance company, is one of Belgrade’s more notable landmarks. 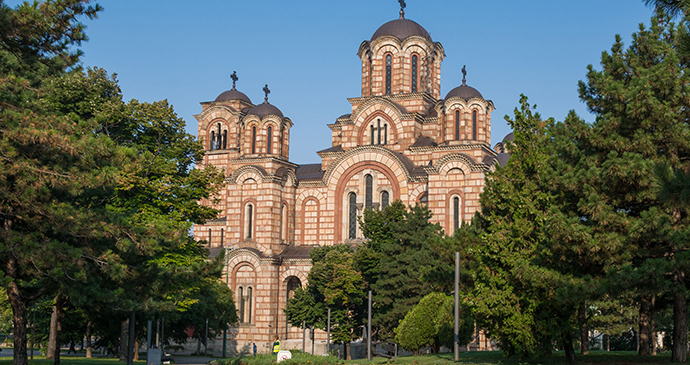 At the edge of the nearby Tašmajdan Park stands St Mark’s Church, which was constructed as a larger-scale copy of the Gračanica Monastery in Kosovo, one of the most hallowed religious monuments of the Serbian psyche. Although interior is quite bare, and dominated by four massive pillars supporting the roof, the church contains a rich collection of icons from the 18th and 19th centuries, as well as the sarcophagus that contains the remains of the Serbian emperor Dušan who died in 1355. 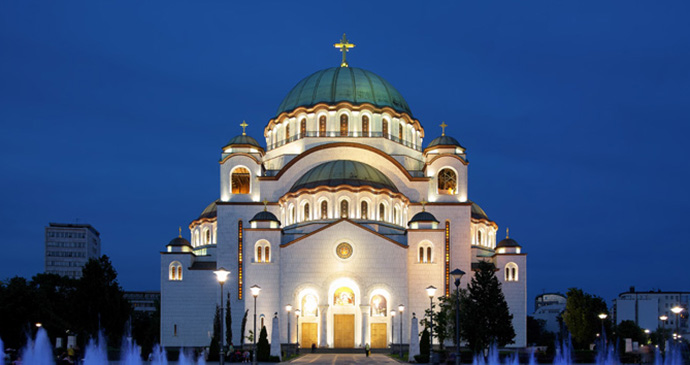 The Temple of St Sava is one of the largest places of worship in southeast Europe © Mikhail Markovskiy, Shutterstock

The Temple of St Sava has an enormous dome that can be seen from all over the city, gleaming through Belgrade’s haze in all directions like a beacon. Size apart, the church is undeniably a highly impressive structure: a neo-Byzantine colossus with echoes of St Sophia in Istanbul. The site at Vračar was chosen because it was the same place where the Ottoman ruler, Sinan Pasha, had the holy relics of St Sava burned in 1594.

Some of the tastiest food in Serbia is the snack food that is sold on the street and from bakeries so stop by one of these places and pick up a burek pastry (meat or cheese) for lunch. 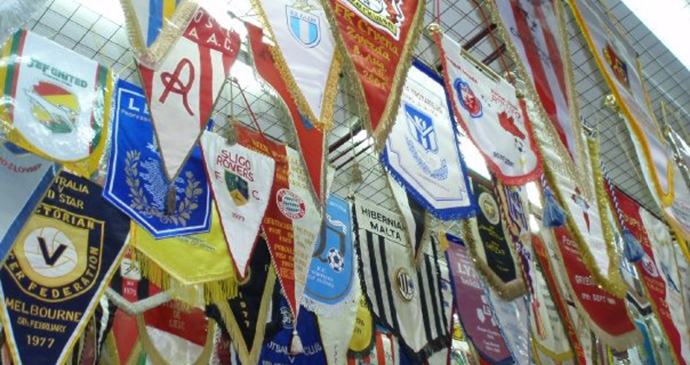 From the Temple of St Sava, either walk of your lunch or take a short taxi ride to the self-consciously exclusive Dedinje neighbourhood. Visit the Museum of FC Red Star Belgrade, located at the club’s ‘Marakana’ stadium. This is where you can see Red Star Belgrade’s impressive collection of trophies including the UEFA Champions cup of 1991. 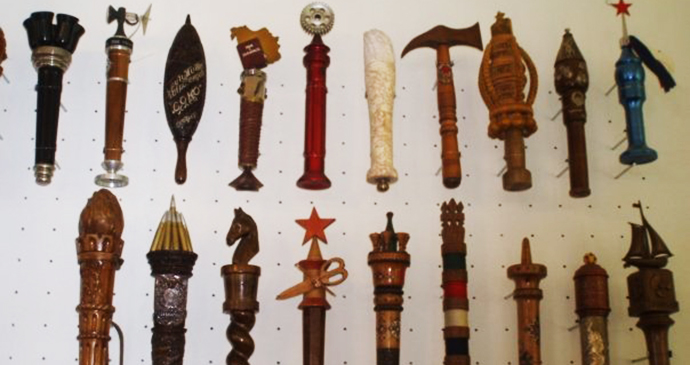 Staying in Dedinje, continue on to Tito’s mausoleum, the ‘House of Flowers’. Tito’s grave lies centre stage under a large marble slab that bears the simple inscription: ‘Josip Broz Tito 1892–1980’. A corridor around the tomb leads to several rooms. One is filled with the ceremonial batons that, each year on the occasion of his birthday, were relayed 9,000km around the federation by Yugoslav youth before being presented to the president in JNA stadium. 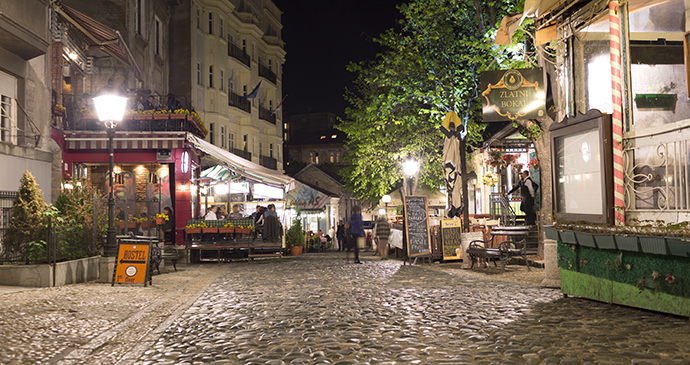 Returning to the city centre, head to Skadarlija street for dinner. Skadarlija does its level best to conjure up the atmosphere of bygone times in the city, albeit in a slightly self-conscious fashion. Its main attraction, particularly in summer, is the concentration of ‘national’ restaurants that which compete with each other to be the oldest, the most authentic. Specialities can include sarma (stuffed pickled cabbage leaves) and karađorđeva šnicla (Black George’s schnitzel). 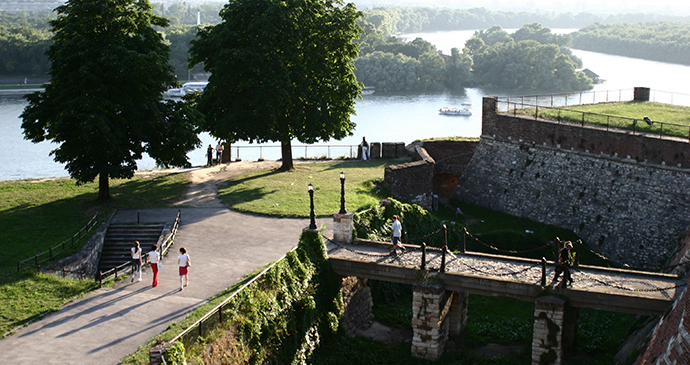 The confluence of the Sava and Danube beneath Kalemegdan © B.Jovanovic, Archive National Tourism Organisation Serbia

Kalemegdan Park is a leafy, green refuge from the city, overlooking the confluence of the Sava and Danube rivers. Ideally, you should then try to visit Kalemegdan Park an hour or two before sunset. This is where native Belgraders go to relax and it is a thoroughly enjoyable experience to go and join in with them. 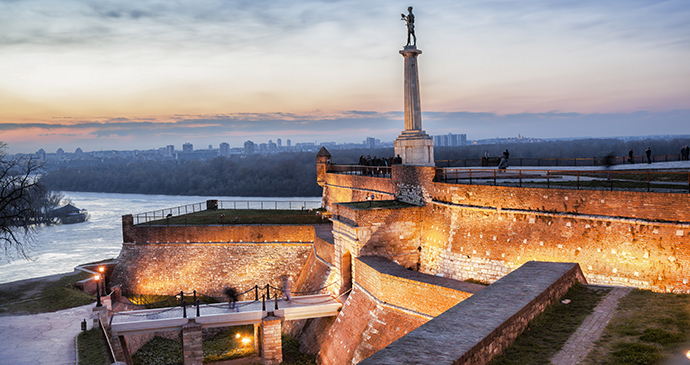 Meštrović’s statue looks out from Kalemegdan and is iconic of Belgrade © Samot, Shutterstock

Walking along the park’s western pathway above the Sava River you soon come to the Messenger of Victory monument. This defiant and proud statue by Ivan Meštrović was originally intended to stand in the city centre but had to be relocated here due to prudish complaints about its full-frontal nudity and quite obvious masculine attributes.

Night – Partying on the Danube and Sava

Depending on how much energy you have left and how early you need to wake up the following morning, party the night away, potentially until sunrise, on the boats and rafts moored along the Danube and Sava. These can mostly be found clustered along the Danube shore near the Hotel Jugoslavija and along the Sava north of Brankov most in New Belgrade.

Want to live your own Belgrade adventure? Pick up a copy of our new guide to Serbia, with a 10% discount, to start planning now: